scream if you want to

Tim Buckley: '......everything in the outside world is not the world, cars, your suit......what's the world is what's inside...'
scattered thoughts, like the ones in my brain from Tim Buckley, there is more on you tube, duh; just as a reminder here to myself there are folks out there who have always felt this; I remember as a young girl looking at adults and also at other kids and thinking: do they mean what they're saying, do they really mean it, or are they acting? are they really feeling what I'm feeling and do they know like I do: it doesn't matter what we do; we have one life, live it, live it now.
Also, if you don't like someone don't pretend you do, don't greet them with kisses and hug them, just don't and if you do like some one: tell them, show them you care and don't be afraid they might reject you, if they do it won't kill you. You go on. Boy, but if they do care about you like you care about them: wow, that's gonna be great, right!!
As a child I saw it, how come others didn't I couldn't get my head around that, I'm telling you: people were upset by what I said and I learnt to shut up.
OMG.
Last week driving in the car all by myself, I felt an overwhelming urge to scream - why? you may ask, because of Life, because I'd just about had enough and because my back hurt, another painful period, hey still fertile, or maybe just the last batch of eggs collectively exiting my body - anyway, I felt the urge to scream and I was like censoring myself (don't be an idiot, you can't scream! not here alone in the car) Ha, that's control-freaking in a big way, so I just let go and screamed and my throat like doubled and it was beyond me and then it stopped and I felt relief and okay. My throat did not feel sore. On I drove and that was that, I came back home, was greeted by the dog, saw my men and felt liberated in a small way. 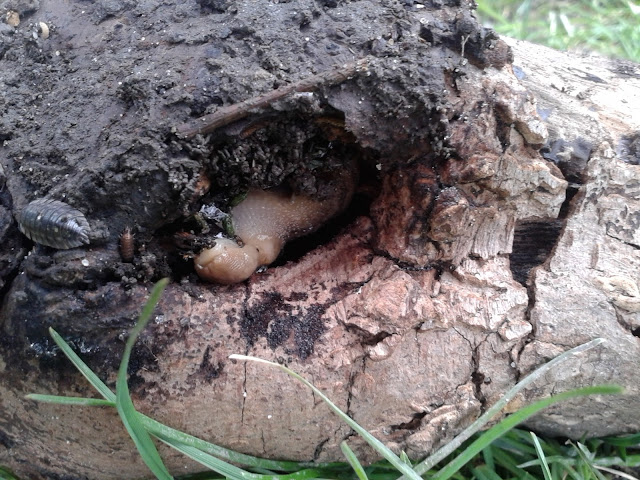 more signs of life in the logs destined for the woodburner; once I'd spotted the slug and wood louse, I took it outside again and they can either decide to move out or stay put, I'm not going to burn them (even if it is pretty cold today) 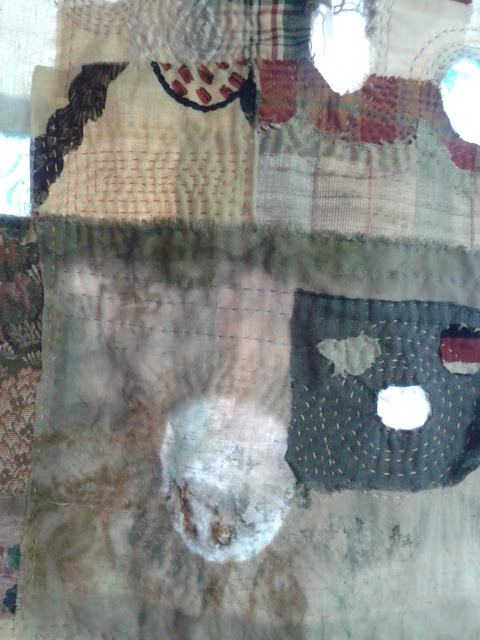 'cloth of change', started in the tail of Spirit Cloth Diaries part 1.
I wasn't happy with the 9 patch as it didn't feel like me or mine, however I wanted to keep it as the 9 patch was the starting point for this piece, so for it to become 'mine' I had to pervert it by cutting into it, choosing circles, as they represented the opposite of squares, something I had done before (f.e.in Motherhood) and placing very thin fabric, puffed up-or not, creating 'opaque windows' or billowing bumps, something I had not done before. Front and back both becoming viewable and equally important. Another piece with bumps 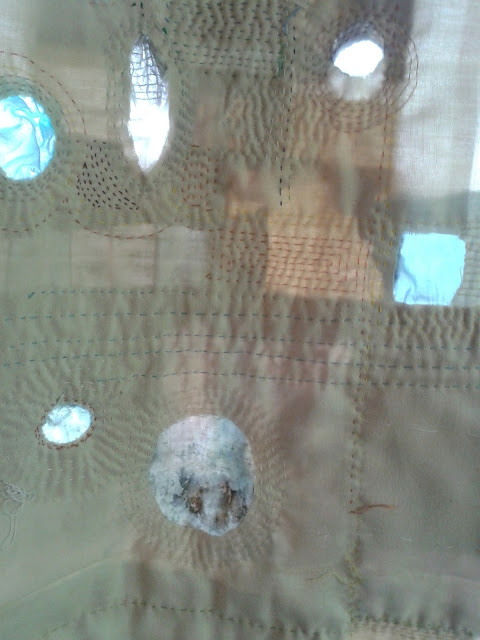 the so-called back is interesting to me as the windows and stitches are more visible, the eye is led to the details 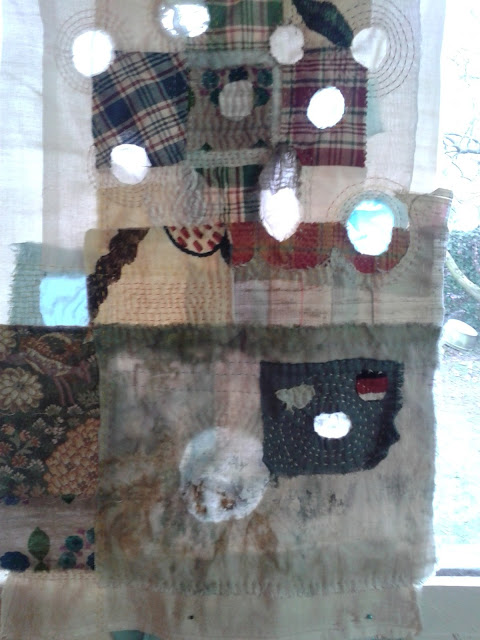 whereas on the 'front' the eye is distracted by all the colours and shapes.
The whole piece is not necessarily 'beautiful' and I like pretty, but I'm letting that go for now, just focusing on what I'm learning here, the process of sewing and the technical challenges of having 'good' stitching on both sides and getting the thin bits of fabric just 'right' in the cut out circles.
Email Post
Labels: cutting motherhood scream slug statement what if
Saskia
Hi, I'm an artist. ' Art might simply be the awareness of how we might create self. That we do. What happens, and then, what we do about it. The story. And the expression of that.' Jude Hill - Spirit Cloth [with kind permission]

Patty said…
Those windows, some with stitching in the air. Like how it feels when coming to the crest of a bridge, maybe into nothing? Great tension and meandering 'prints'. Love that cloth!
24 March 2013 at 20:52

Nancy said…
OK...so I'm back with the rest of what I wanted to say.
Your screaming in the car took me instantly to an old song by Dory Previn.
This is the album my mama had in the 1970's:
http://www.youtube.com/watch?v=DHL75L0XYzs

But the song I was think of is here:
http://www.youtube.com/watch?v=oKVNUyIOE-o

This version is not as 'crazy' as Dory's and some of the lyrics were left out.
"I said animals roar
when they feel like
Why can't we do that too
Instead of screaming
Banzai Baby
In the war in the human zoo".

Of course I like Dory's haunting version better because that is the one imbedded in my teenaged-time memory.

All of the songs have an element of unstable-ness...therapy through song lyrics!
I now wonder the impact of countless listening to such music! Ha.
If you can find any more of her stuff...or the lyrics...
I've got my mom's album here, but no record player anymore :)
25 March 2013 at 00:32

patricia said…
scream away wild woman. and listen for my screaming reply. i think its great. healthy even.
love the circles you cut in your cloth--making circles to counterbalance the squares. and what amazes me the most is how good your cloth looks on the backside. my backside (my cloth backsides) are quite the mess. well,actually my actual backside has seen better days as well.
25 March 2013 at 03:04

Saskia said…
Patty: verging on the brink and not knowing what's beyond...that is exciting, yes?!

Nancy: the slug/finger took me by surprise too....
what a great song screaming alone in the 20 mile zone LOL thank you, thank you, there is a BIG smile on my face right now;-)

Patricia: I hear you screaming!!!
about the backside (on the cloth ha) yes it looks nice, because once I had decided it was going to be two-faced it needed to look good both ways, especially as I want to be able to hang it in a window with the light shining through; what you see on the 'front' was sewn/pieced together and once I started cutting through was when the long strip of beige began to get sewn through as well; I hope this expains it a bit; I love the challenge of it having to be view-able both sides, I have done it in earlier pieces, see under label 'cutting'
25 March 2013 at 19:42

Anonymous said…
funny to read this two days after I let loose a blood-curdling scream in parenting frustration (and I don't even have a period to blame anymore!) Glad it came on out and set you into relief. A car ride alone has always struck me as a perfectly acceptable place for letting loose screams.

The cloth IS pretty... the holes make it so porous and interesting and I agree that there is no 'wrong side' here...

Saskia said…
Dee: the piece is growing on me, the actual process of handling it lets me see 'the beauty' and it is teaching me a lot about sewing (well I suppose all do, but this one in particular)
29 March 2013 at 09:45

Saskia said…
oh and Dee re the screaming, once I start telling friends about the screaming they all have their own stories on that subject!!
29 March 2013 at 09:46