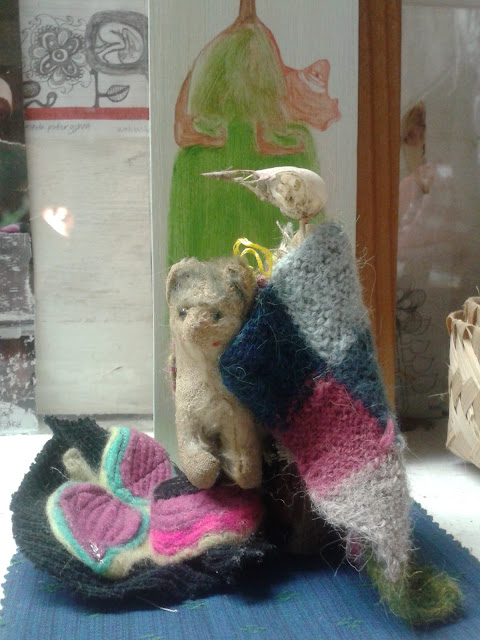 You would think a cat and a bird do not go well together. Under different circumstances you would be right. The bird and cat in question however, are both so old they cannot remember their age, just their year of birth, and even that seems meaningless most days. They have buried many family members,  or read about a certain person’s death in the newspapers. They have lost touch with friends from bygone years and find themselves thrown together in unfamiliar territory. They move towards one another, not in enmity but with a strange sense of familiarity. They are of a similar age, of a similar period, they share memories of the same world events and can still see their parents busy in the garden or at the kitchen table with that particular way of acknowledging the other‘s presence with a mere glance. Though their viewpoints might once have differed hugely, one acting out his role as the hunter, the other portraying the prey, they now find themselves in the same boat as it were, in a murky backwater with little light, a slightly unpleasant smell emanating from the bracken water, but nothing much worrying them at this particular moment in time, they are fed and clothed, have a warm bed and share the occasional chuckle.
It is the old bird-king and the Tom Cat we have here. We have met the king before, but the cat is a newcomer to our stories. Once a handsome young fellow with eyes like two emeralds set in a lush, soft grey fur and the whitest of whiskers you can imagine, so long they were the envy of cat women. He was especially beloved by his young owner, a boy named Hans. They would spend as many hours together as they could and think of each other when seperated. During the daytime when the young boy had to attend school, and during the nighttime whilst the young boy slept, the cat of course would sneak out of the house (as Hans’ mother didn’t approve of his running off and getting all dirty) off to chase mice and birds and cat women, oh my those were the days. As soon as the boy came back home, or once he’d woken up in the mornings, he looked forward to Tom Cat’s stories of great adventures and narrow escapes; like the time he had stolen a sausage at the butcher’s and had almost had his tail chopped off with a huge knife, or the time he’d failed to catch a mouse at the bakers and the baker’s wife was so angry she almost clobbered him to a pulp with her rolling pin! Oh how the boy loved these stories, for boys of all ages like a bit of violence and risk taking in their own lives or that of others.
Tom Cat was more reluctant to boast about his nighttime romantic escapades, not so much for the sake of the young boy, who gradually was discovering more about the birds and bees and actual girls for himself; it was more a question of ‘kiss and don’t tell’ to keep the ladies reputations intact, if not everything else…He also realized cat women gossiped quite enough amongst themselves and it was best if he did not add to the tales of all that was going on in his life, so as not to ruin his chances with all the beautiful cat women.
As mentioned before, Tom Cat also loved chasing birds, boy did he love chasing birds! Catching them and then torturing them and not eating them, just pulling them apart until they eventually died, it was all quite gruesome and the young Hans enjoyed listening to these frightful tales almost as much as the cat enjoyed reporting them to him.
Most of all Tom Cat loved to chase the old bird-king, who was himself of course  young and strong too; he was covered by many brightly coloured feathers and held himself upright and strutted his stuff like there was no tomorrow. A more handsome bird was never seen, well not in these parts anyway. These two animals were destined to meet each other: both were passionate and powerful and out to prove to the world they were King. They fought with each other so many times they stopped counting, sometimes Tom Cat won, other times the bird-king, most times neither really came out of a fight victorious, rather they would limp away bleeding and nursing yet another wound, to add to their collection of scars. They grew to respect each other, as is often the case when nobody is the obvious winner; their fights became more a kind of ritual, a succession of motions played out like a ballet on stage, their own small stage in the grand scheme of things becoming less and less important; life moved on, people and animals moved on and became less and less interested in their exploits. Gradually their fights stopped completely and whenever they did get together, there was some back slapping and small talk and they’d have a beer together and go their separate ways.

These days, they have little time for small talk, they have few acquaintances and they meet up regularly to share memories of those glorious days gone by and sigh together remembering how they used to dash and dare and reminiscing on so and so, oh yes she sure was a beaut’ , oh she’s dead too is she, ah well, ‘tis what it is. Thus, it is possible for these two animals to sit peacefully together and watch the sun set, murmuring so softly only they can hear what they are saying, a whispering one barely notices when walking past, you’ld mistake it for the wind and wink to yourself: I must be growing old and imagining things.
Email Post
Labels: bird cat

Anonymous said…
it is wonderful in detail and tone and vocab... agree with Grace - MORE, more more. you are such a natural story teller!
4 March 2013 at 22:16

Saskia said…
Thanks Dee; I never considered myself a story teller, not with words anyway; but hey it happened...and long may it continue
4 March 2013 at 22:45