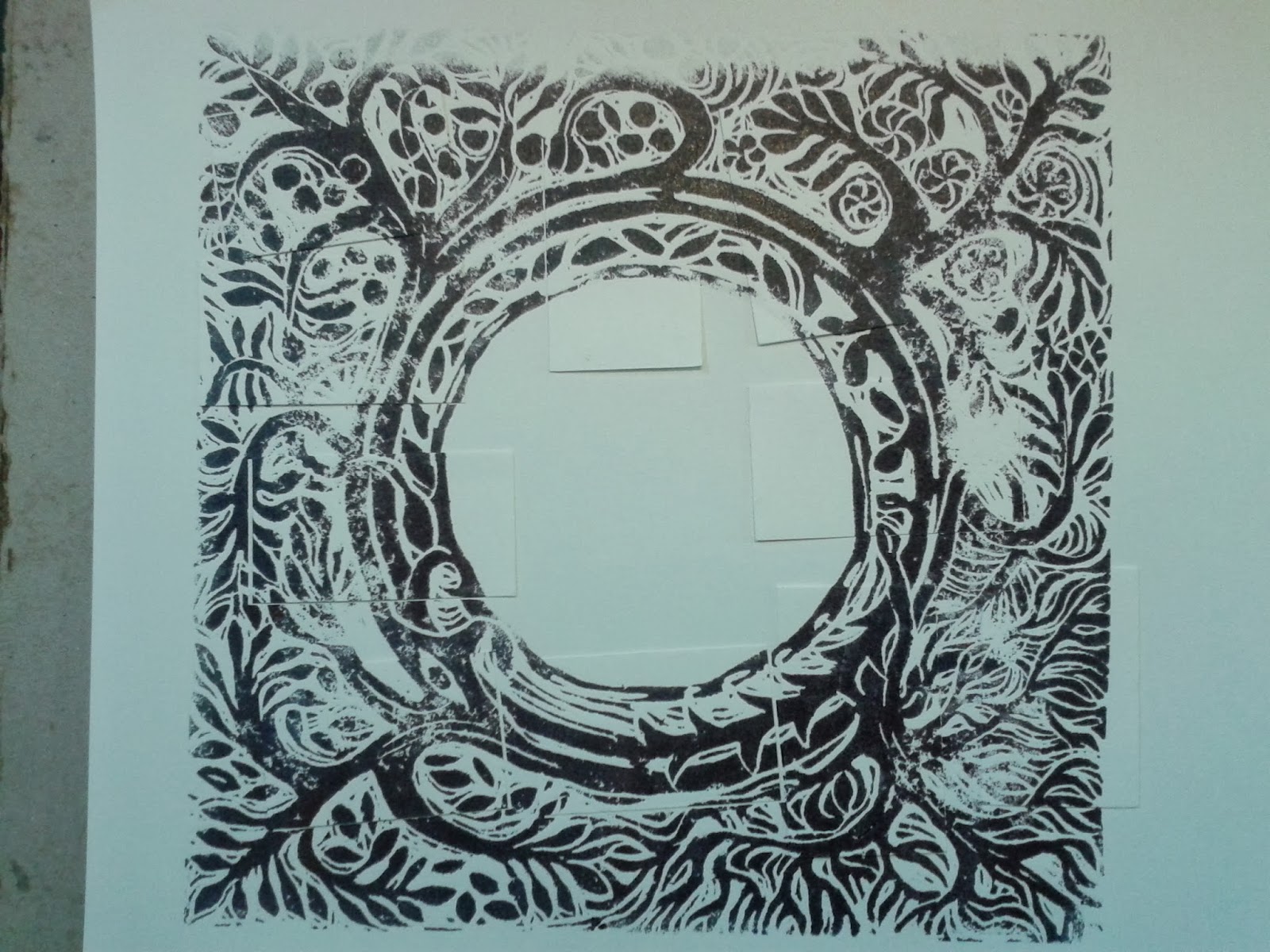 as I don't sign the fabric pieces like I used to do the paintings, but I still wanted to 'leave my mark' I came up with the idea of making cards with bits-of-print on one side and a personal stamp with my initials on the other, together with the title and year; hence exhibit number 1 as shown above, where I had precut the cards and lain them willy-nilly on another piece of paper for the excess print so to speak; after removing the cards I was left with this: exhibit no.2 as shown below 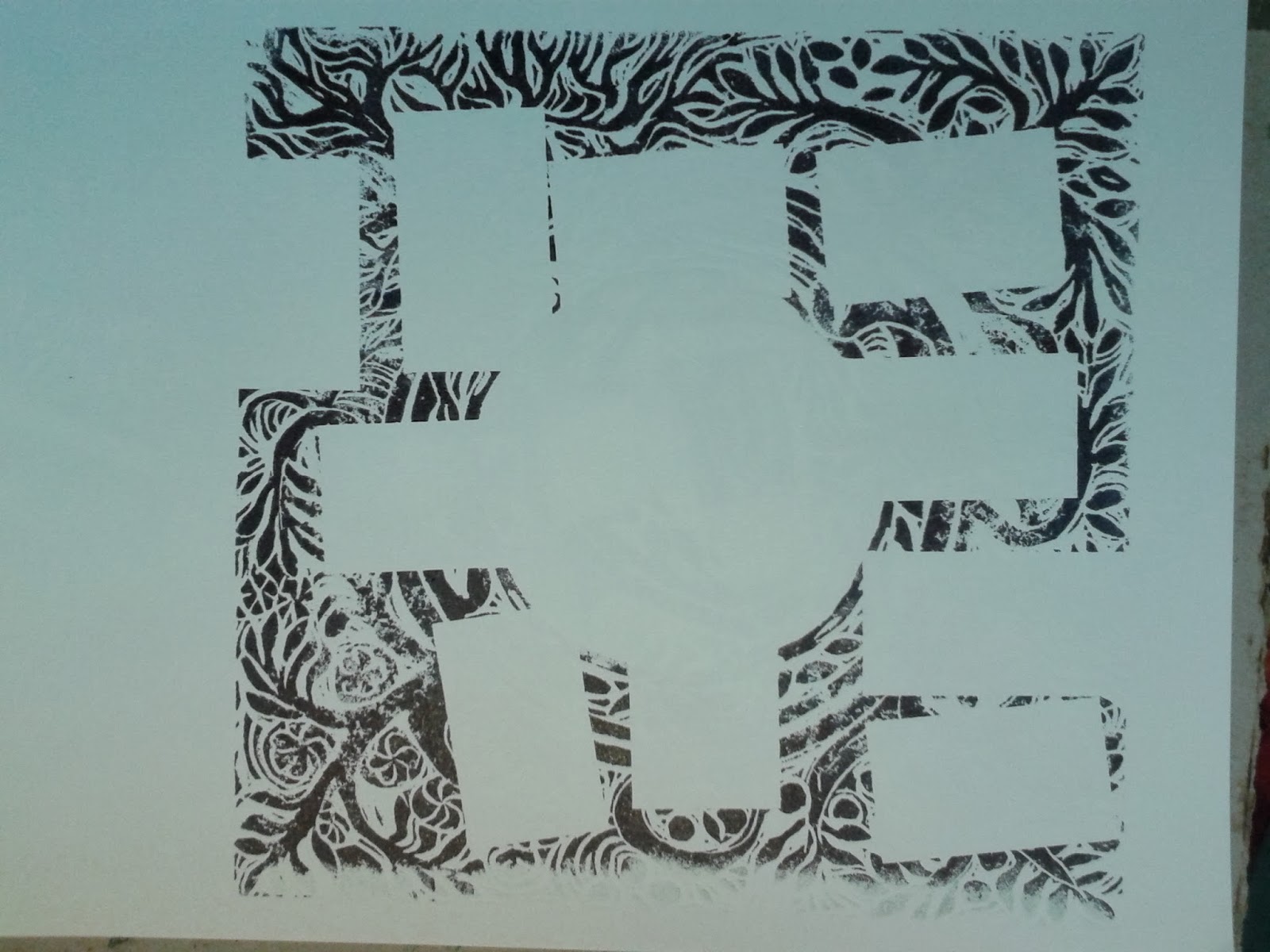 I quite liked the look of this, with all the cards mixed up it became a collage, two variations shown below: 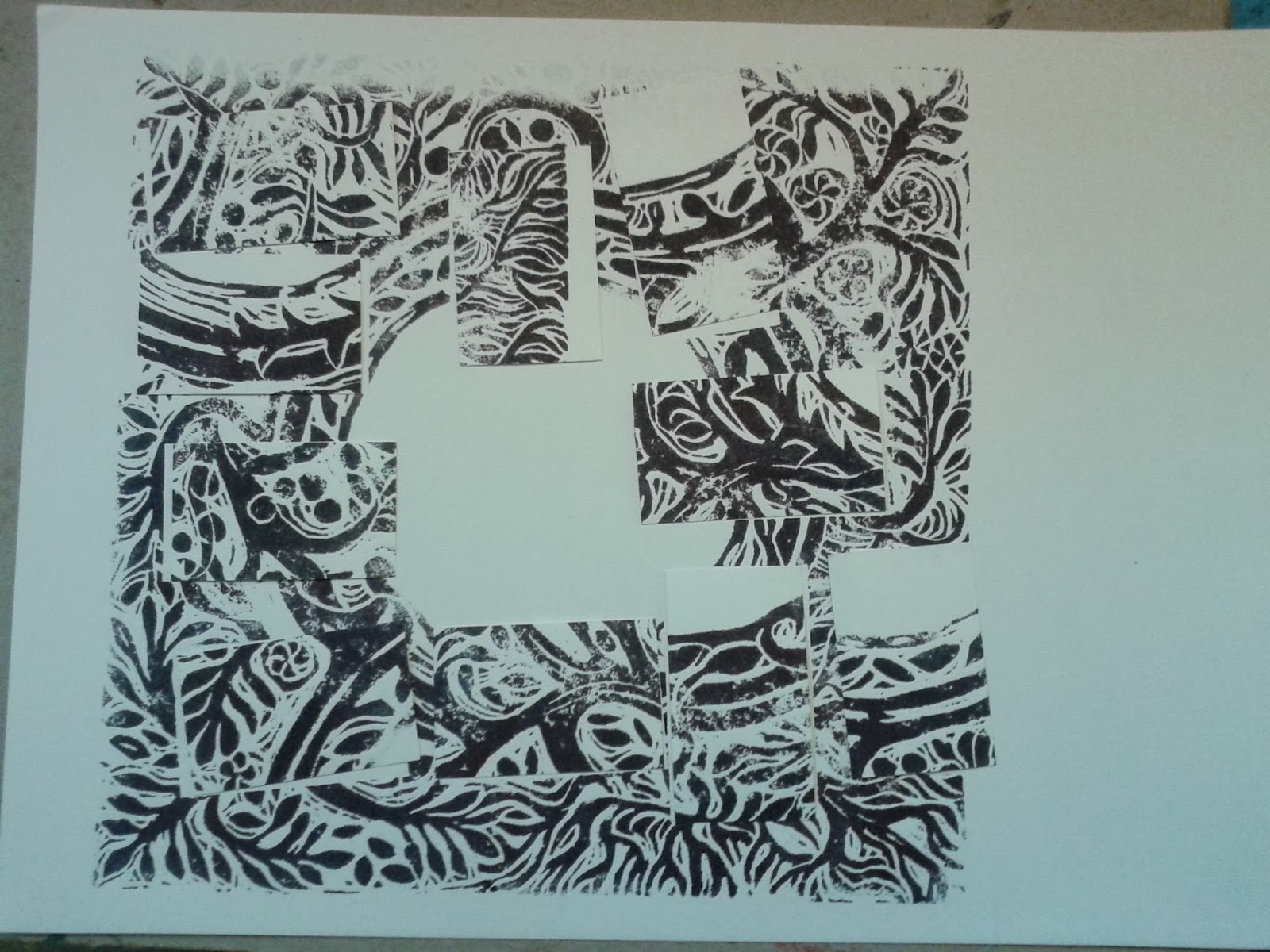 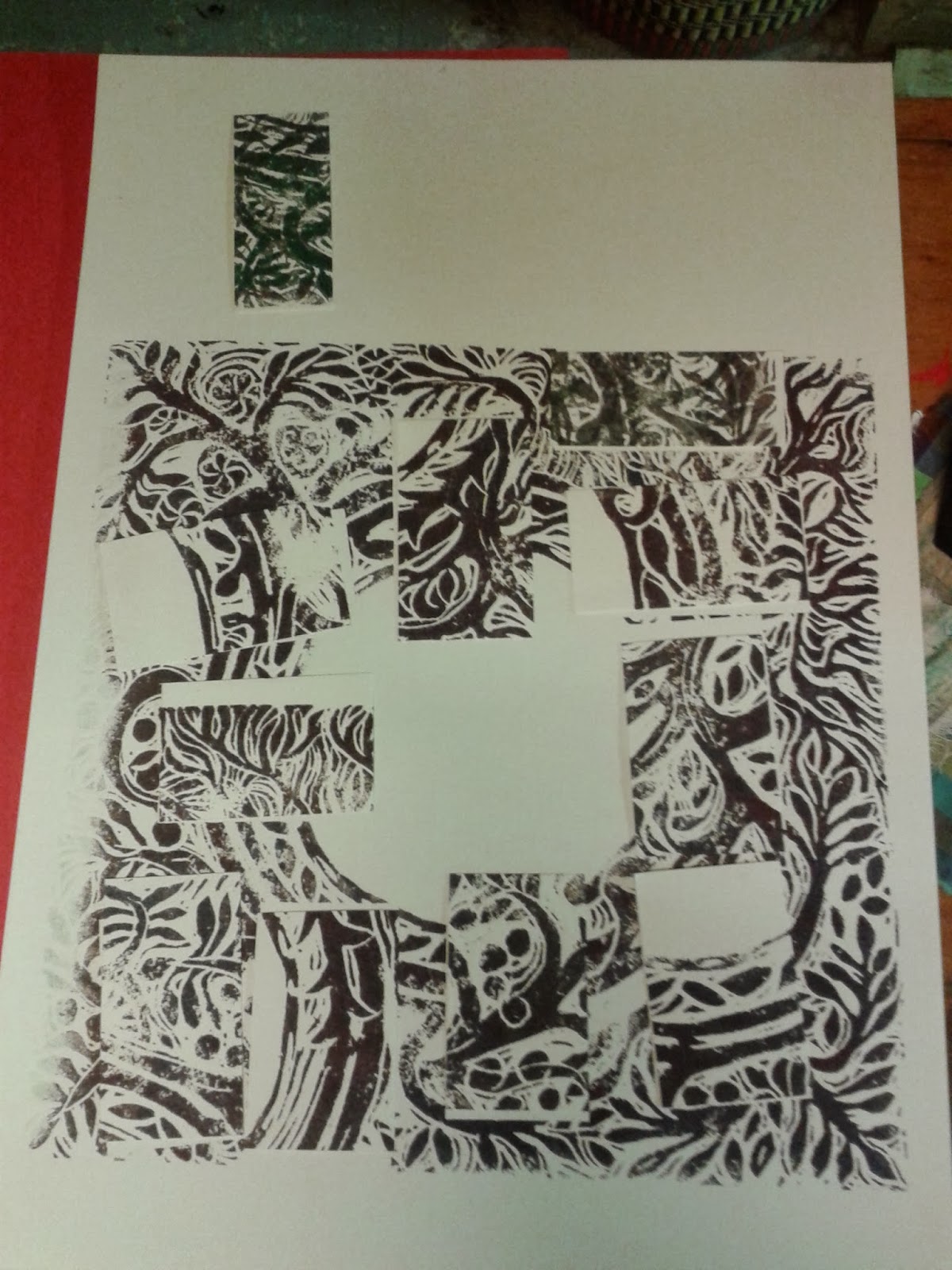 so now I had a nice idea for printing and collaging, but no cards and I went the other way round: print first, cut later, much more sensible, here too I could experiment with the printing without worrying about results as the paper was going to be cut up at random for the cards: 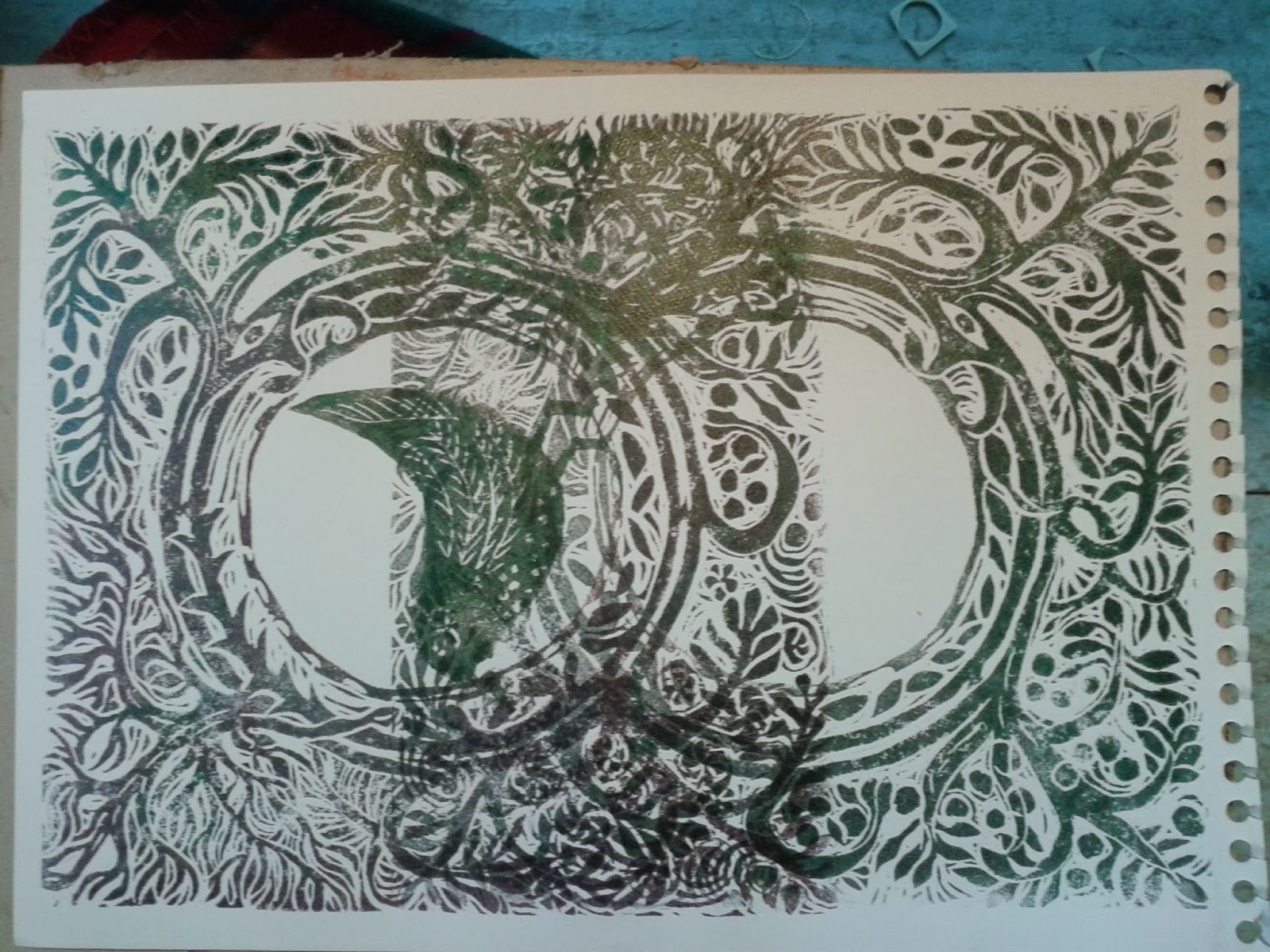 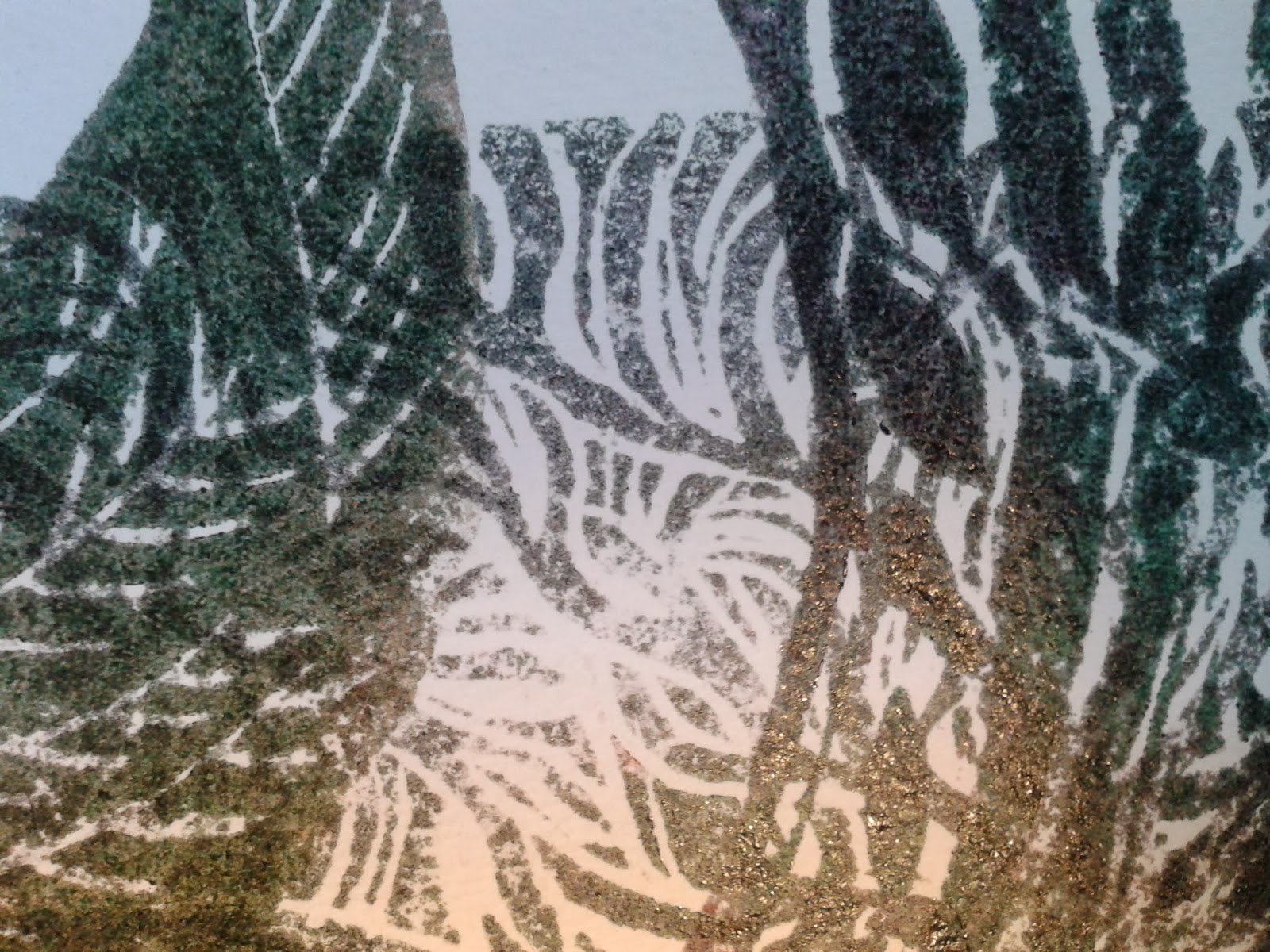 I now have a tray of signature-cards 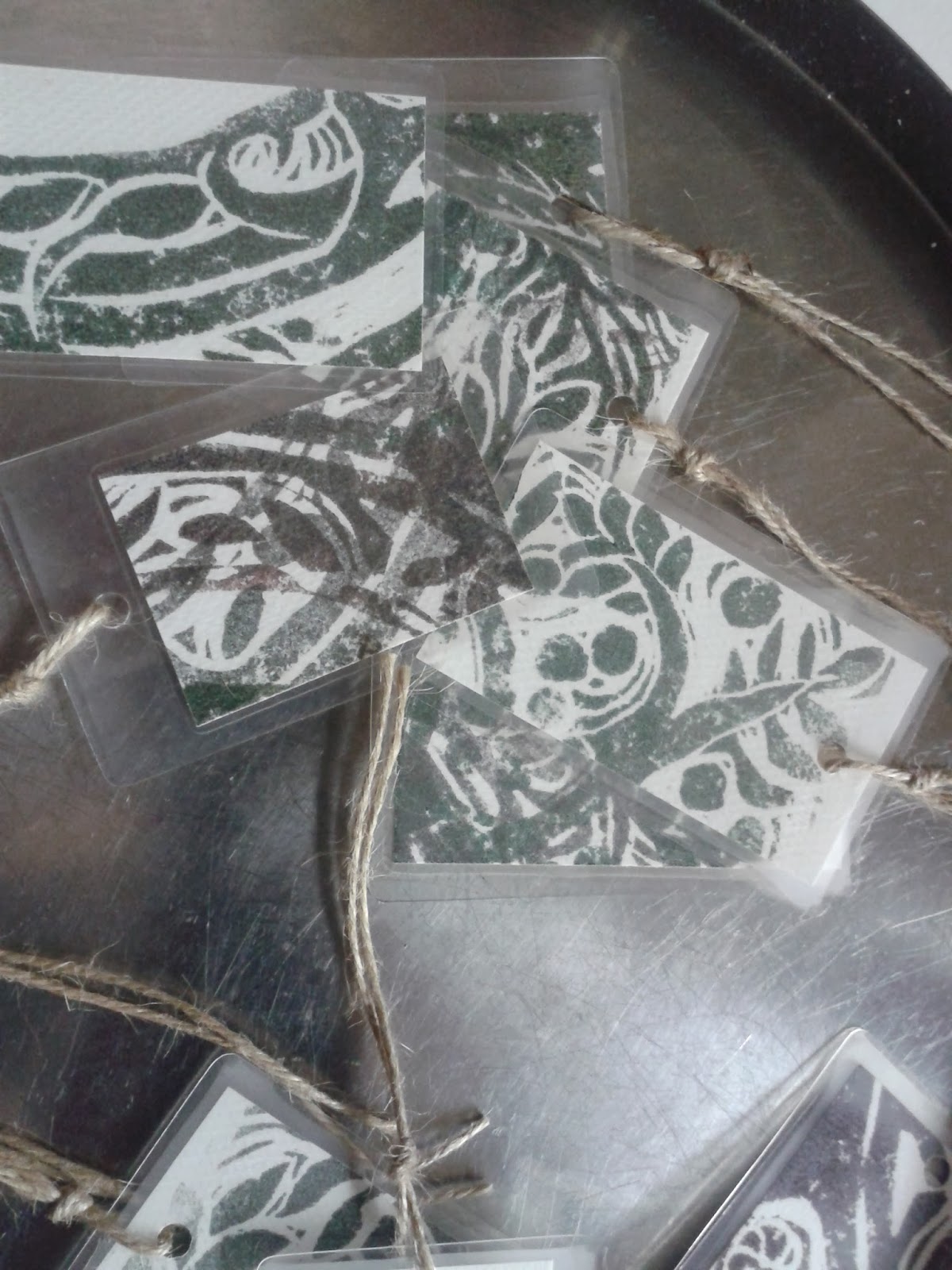 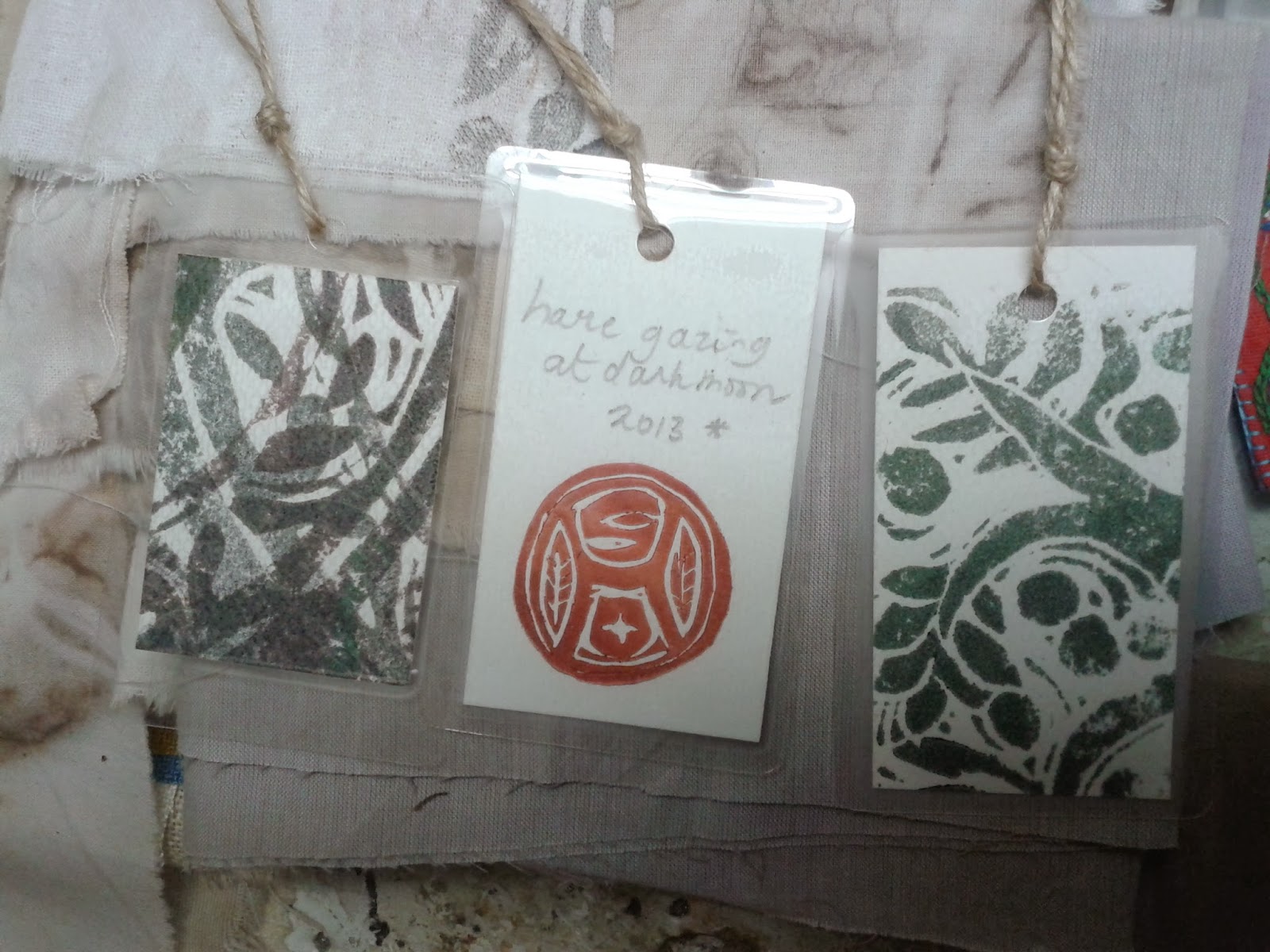 * it took 3 tries before I got the stamp right: first one I cut the 'S' the wrong way, second one the 'D' oh how foolish was that....third time lucky with the 'D' lying on it's side (that's the one with the star) and two leaves/feathers; the S is for Saskia, the H for my married surname van Herwaarden and the D for my maiden name van Dijk (and also my husband's first letter is D as well, so there you go)  SHD gathering leaves, feathers and other debris 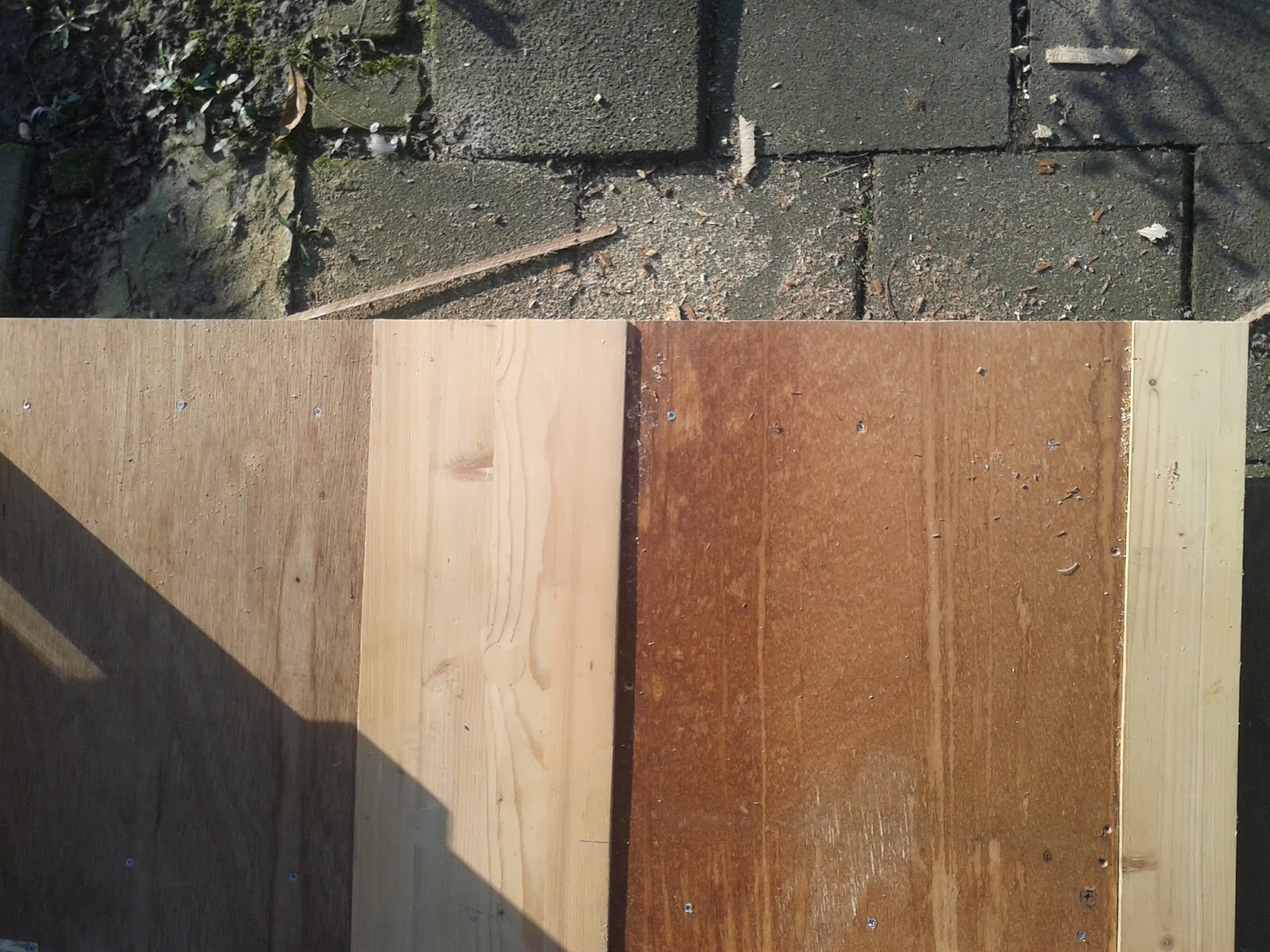 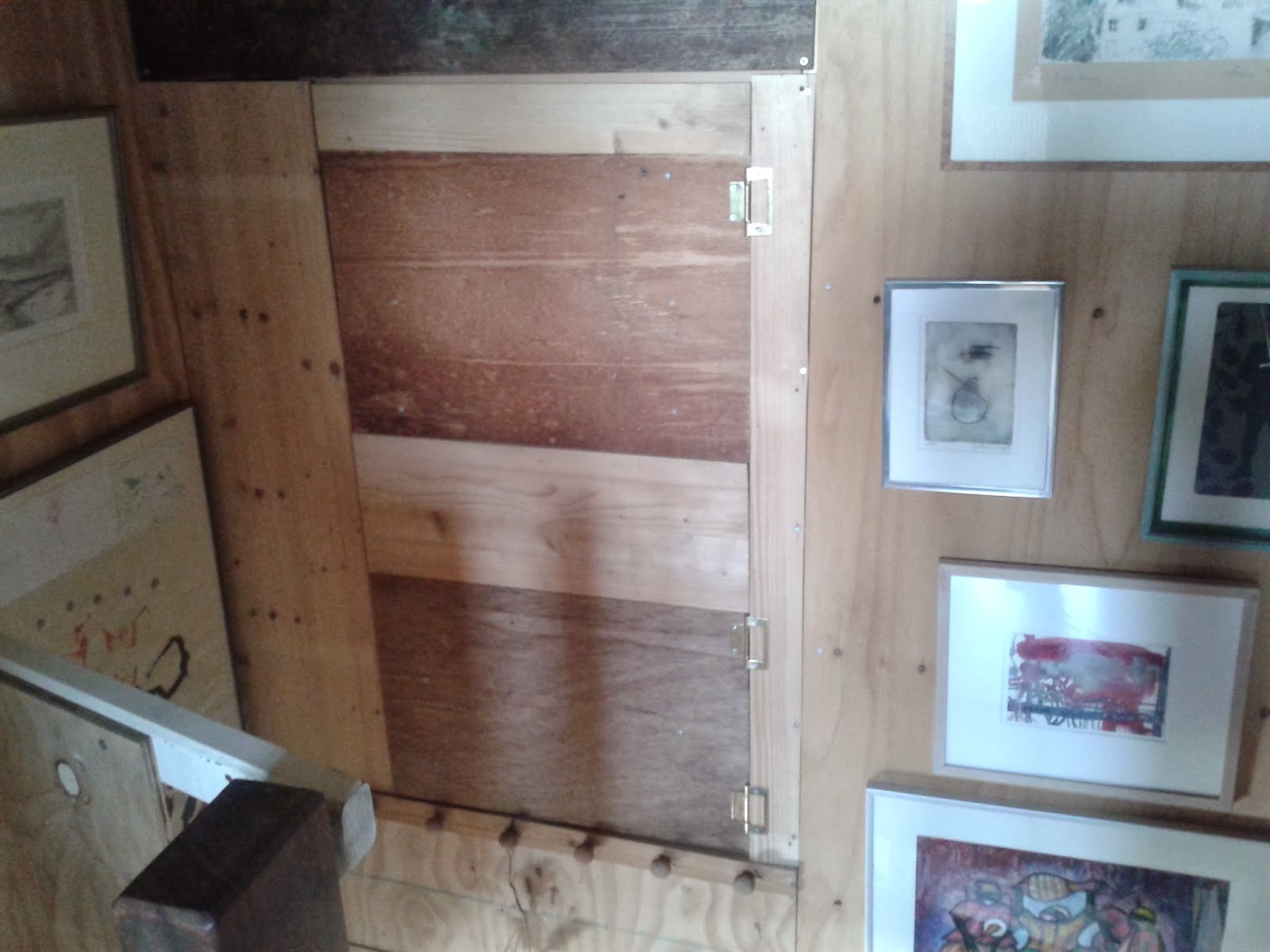 new door in stairwell, giving access to central heating system(chs); you know how you can keep on putting something off until you completely forget you wanted to do it? well it was like that here in our stairwell where I'd made a curtain to hang in front of the c.h.s. as a temporary solution, temporary meaning 6 to 7 years give or take. Very often some annoying occurrence has to nudge me into action! In this case it was a horrible rattle-and-screech sound from the c.h.s., not constantly but often enough to get on my nerves.
It started weeks ago, we had been noticing more noise and less heat, not a very pleasant state of affairs in winter even though it has been a mild one, therefore the problem didn't seem too urgent.....We had a guy come to check out the central heating system and the first time he came round my husband was home and the two of them of course heard nothing, nothing annoying or disturbing that is and off he went and my husband very pleased that he had fixed the problem as there was no problem which had been confirmed by the expert. Weeks later (last thursday) again this racket, yes by now it really was too much and I rang the guy and he came round and we had coffee whilst trying to get the central heating system to make the annoying sounds whilst he was there and lo and behold: screeeeeeeeeeeeeech and now we're talking 'okay'he says 'I now know what the problem is and more importantly the solution: I'll have to change the expansion vat' at last I sighed.
A week later he returned with said vat and for him to be able to replace the old one with the new one I had to remove the curtain and several of the planks in the stairwell. After he'd fixed it and left, I felt relieved we had gotten rid of one nuisance. But still the curtain remained and as I was screwing the planks back in I said to self: now would be the perfect moment for you to go and make a door and get rid of the temporary curtain! And so it happened that I made a new door with several bits of wood we had lying about and luckily 3 hinges that were exactly right for the job;-) and the sun was out and the weather just right for sawing and screwing and getting things done out on the verandah; the top photo is of the door where I'd screwed all the bits together and even after careful measurements it wouldn't fit and I had to saw off about 2 to 3 mm, which is near impossible, but I managed to somehow saw off just enough for the door to fit........another sigh of relief; it has taken me two hours and several years of waiting for the motivation to actually do it, whew
Email Post
Labels: prints wood

grace Forrest~Maestas said…
i am
IMPRESSED!

Nancy said…
Wow! I admire you... can-do-gal!
I love the idea of the cards, which combine your printing and your cloth in your unique way! What are the cards encased in? Great idea.
1 February 2014 at 02:23

Saskia said…
eh well Grace, I have to admit: yes! I'm not very good at cleaning or keeping things clean (the inside of my car even scares off my husband)I can get lost in the details of something, losing sight of the over-all view.....and so on....
you do know Julie, I was trying to cut back on different kinds of activitites;-)
hi Nancy, the cards are 'laminated' in plastic envelopes: you place the bit of paper or leaf or whatever in the envelope and run it through a heated device, the laminator and out they roll all pristine and shiny and more or less rub and water resistant
Debbie: lots of years of practice, trial and error after error after....
thanks Patricia!

Nancy said…
Ah, but of course...now I can see that they are indeed laminated. At first I thought some sort of small bag. As a teacher, I've laminated lots!! I love how frozen in time things look :)
1 February 2014 at 22:47 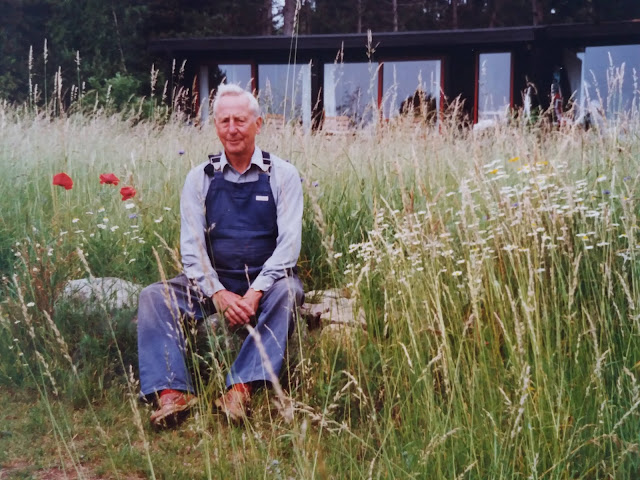 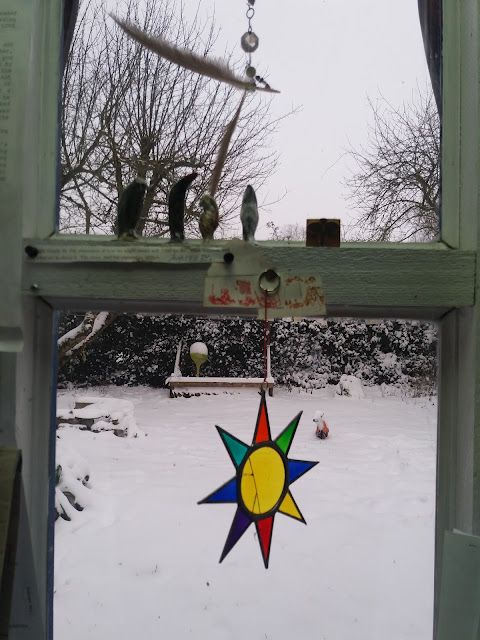 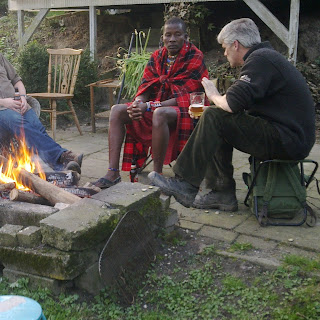 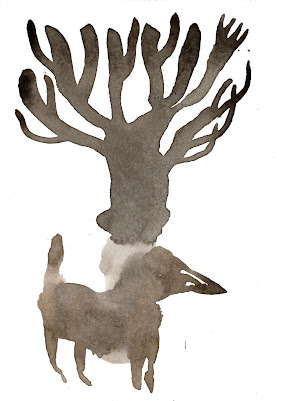