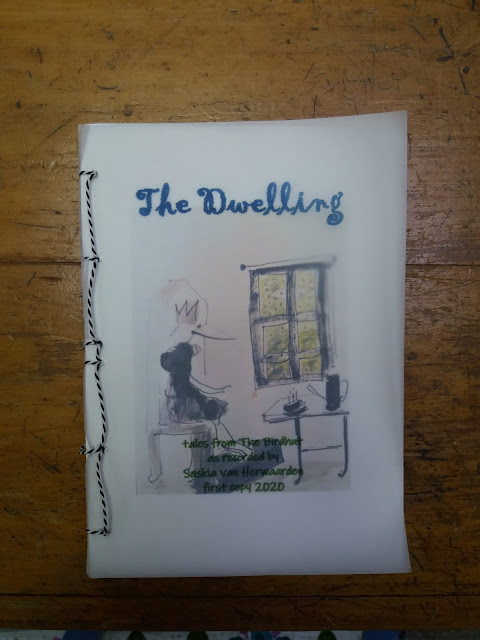 the black&white binding thread is a gentle nod to Jude, echoing her kind of magic and The Dwellers have that in bundles

First finished home-made copy of The Dwelling; after countless mis-prints, several re-writes, two awkward attempts at binding,  I finally managed this so-called Dutch binding [page 53 in Esther K. Smith's How to Make Books book], or slack stab-stitched binding to finish it off. This relaxed binding allows the book to be opened flat, in an ideal world that is. I made the mistake of drilling the holes before choosing this particular binding, thinking it would not matter! As the pages are not even in size, I opted for the far edges, i.e furthest from the binding, to be as squarely lined up as possible. I thought that would help make it look a little neater. As it turns out I should have chosen the exact opposite. The slackness enables the book to lie almost flat, but as the edges to the left of the binding are different in width, there is a nudging tightness and the pages tend to rub against each other....live and learn! However, now that I have this book as an example and the images and chapters aligned to my liking, it will make having it printed a lot easier! 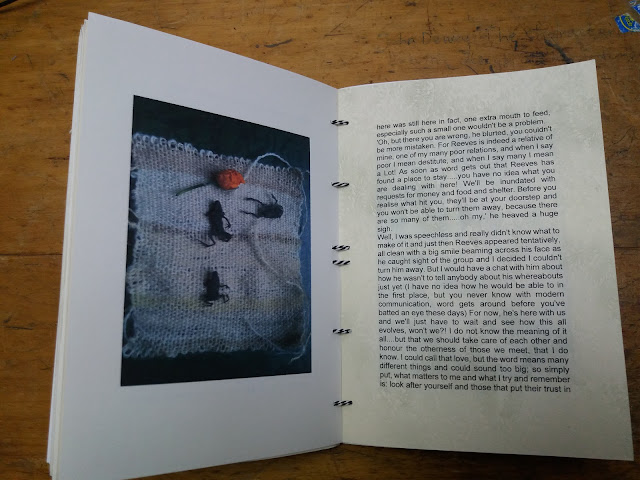 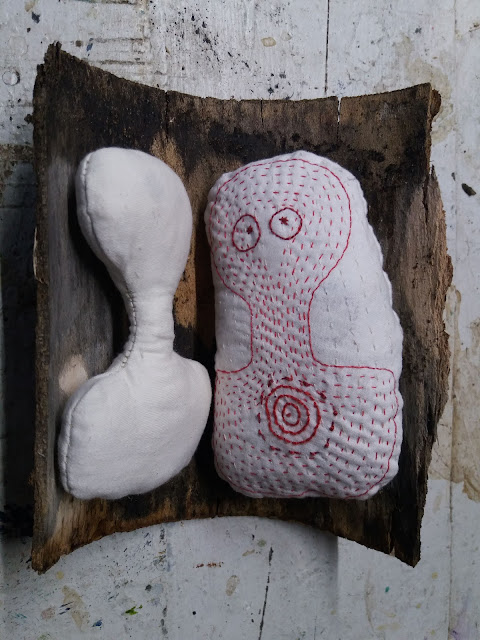 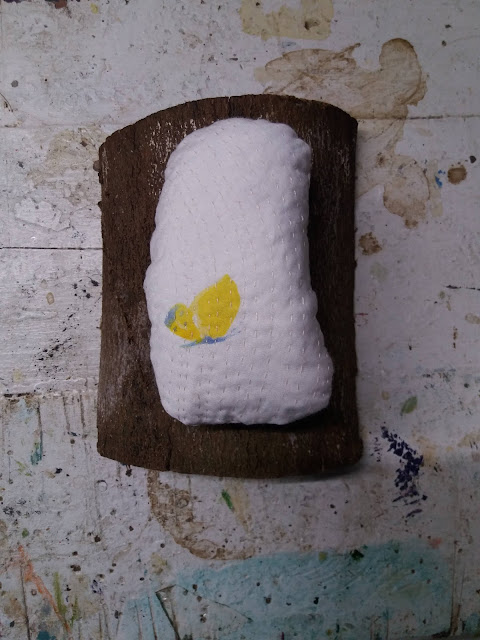 small enough to be held in your hand 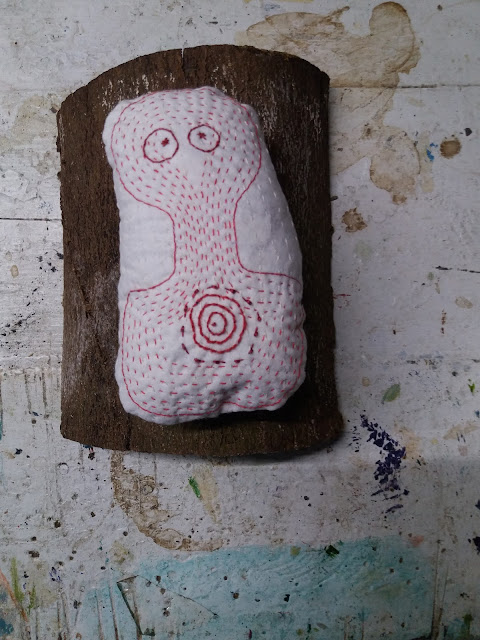 I used red thread for several reasons: feels symbolic for blood, it was my mama's favourite colour, contrasts nicely with the white; there are different shades as I ran out of the bright one I started out with, the spermatozoa and eyes are a darker shade and the egg cell red isn't even embroidery floss but a remnant from a stray thread that somehow ended up in my thread basket 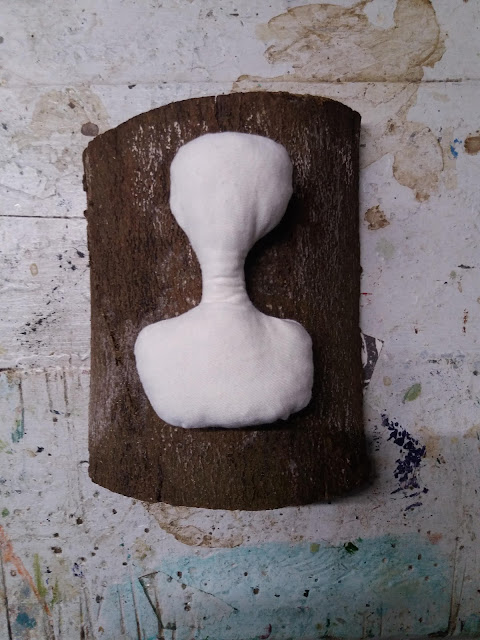 'Last weekend I went to visit my parents as our mother had taken a turn for the worse. She is in pain. It is truly horrible to see a loved one in pain. I stayed the night, trying to take care of them both and reorganise yet again their daily routine. I am not alone in this, fortunately. Together with my younger sister and brother we look after them as much as we can, none of us live close by, and have organised more care in the home.

I was and am moved to tears each and every time I think of these words. I am grateful he feels this way and is able to share this with her. In this phase of his life he has difficulty talking, finding the right words does not come easily. This time he was spot on.'

Why am I adding such a personal moment, you might ask. Because of the white fabric used here for my idols. It's from a duvet-cover that once belonged to my parents when they were still sleeping in the same bed, sharing a large duvet, as they had done for their entire marriage. They stopped sleeping under a large one over two years ago, after my dad's heart attack. My mother was a poor sleeper by then and once he had returned home from hospital, she couldn't tolerate his tossing and turning during the night. Although they at that time continued to sleep next to each other, they each had their own single duvet. My nephew got the large one, I got the lovely cover and matching pillow cases. Turned out me and my husband sleep together under a much smaller duvet and so I had to trim it back to size, leaving me several strips of fabric, with an assortment of motifs: flowers, birds, butterflies and grasses.

Return to the idols, I used the duvet fabric for both of them. On the back of Idol number two I wanted a butterfly. Thinking of the Chaos Theory, I like to imagine how the fluttering of a butterfly's wings might - in a round-about-way - have led to my birth from my mama's womb. I know it's a bit far-fetched and I have probably misinterpreted the theory, but that's all okay, because my making sense of what's nonsensical is what art, to me at least, is basically about.

I feel much lighter now having produced something tangible and because I have not turned away from my emotions for fear of being overtaken by them, I know by now they never last and there are only moments...of sadness as well as joy.

Email Post
Labels: bookmaking books butterfly earth mother fairytale family idol melancholy the Dwelling
Saskia
Hi, I'm an artist. ' Art might simply be the awareness of how we might create self. That we do. What happens, and then, what we do about it. The story. And the expression of that.' Jude Hill - Spirit Cloth [with kind permission]

Mo Crow said…
(((Saskia))) so good that you have had some time out just for yourself to honour your grieving with these memories and making
30 November 2020 at 22:10

Nancy said…
Saskia~ Oh the book! Noticed Jude's 'magic thread' right off and oh the remote-control...oh yes. But more importantly, your time to be, to heal & remember, to create...so wonderful. I love seeing where your heart, where your creativity takes you. xo
1 December 2020 at 02:17

Saskia said…
it's really rather wonderful how time spent on my own can be fun Mo; I would encourage anyone to give it a go;-)

Saskia said…
Nancy, I have just been over to your blog, catching up with your latest exploits and I must say I love where your creative and ever curious mind takes yourself and us! I'm always learning about new stuff whilst reading your posts xx
1 December 2020 at 13:48

deemallon said…
How nice that you got some solitude at what sounds like a very good time! I’m always so impressed by your work but what really moves me today is the story behind the duvet scrap. Lovely!
1 December 2020 at 14:23

Liz A said…
married while still in college, I have never lived alone ... so I find the thought of solitude very appealing, even as much as I value togetherness ... it's a paradox

I love the way your book lies open ... learning by doing is so much more satisfying in the end than simply following a "recipe" for making ...

Saskia said…
absolutely Dee, the stories behind some of the almost overlooked stuff never ceases to amaze me, and in our cloth-circle it's an added bonus when those memories are held in fabric, literally...which we can then continue to re-use

I guess I can count on you as my first first-book buyer Grace;-)

paradoxes are what keep our minds in shape Liz, hihi.....I am a very poor recipe-follower, I don't know quite what it is but I seem to overlook the most important information given, ending up with what I like to call 'bold, interesting experiments, humph!' and also, re the idol-making, I would never, ever have thought it would be so restorative, serves me right for thinking 'thinking' works better than doing!!
1 December 2020 at 17:28

Dana said…
Oh yes, the need for solitude after an interlude of enforced community, seasoned with high emotion....I'm so glad you had some time to yourself. Also, it looks like the fallow time yielded some beautiful and intriguing results.
1 December 2020 at 22:27

Saskia said…
had to google 'fallow' Dana, I do so love the English language [as did my mother] hopefully I will remember it and be able to use it someday soon....
5 December 2020 at 16:04

Patty said…
Creation is sometimes shy. I love time on my own to make things. No
meal making, cleaning, phone off, music on. I do love your results!
12 December 2020 at 16:14