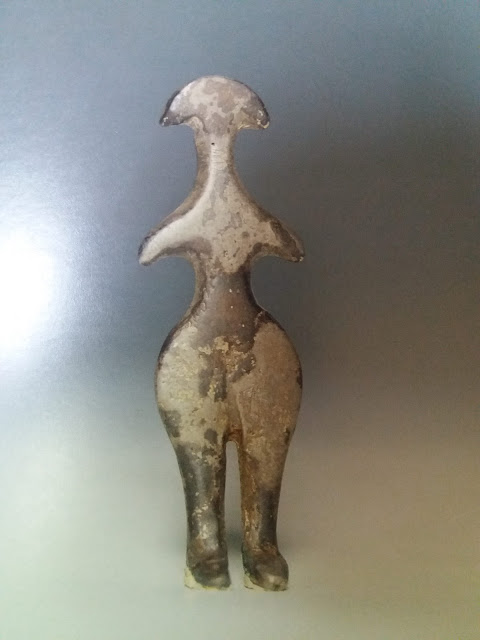 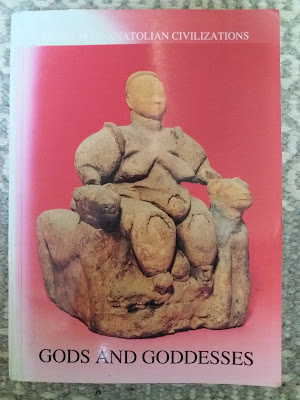 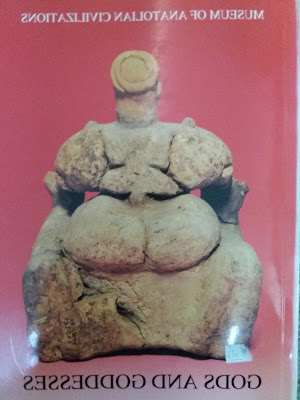 Browsing in my parents' book collection last week, I happened upon this treasure 'Gods and Goddesses'  from the Museum of Anatolian Civilizations; according to my dad's handwriting on the title page they were in Ankara in September 1993.
Of course it had to come back home with me, looking at the back-cover I'm mightily impressed by that bum! 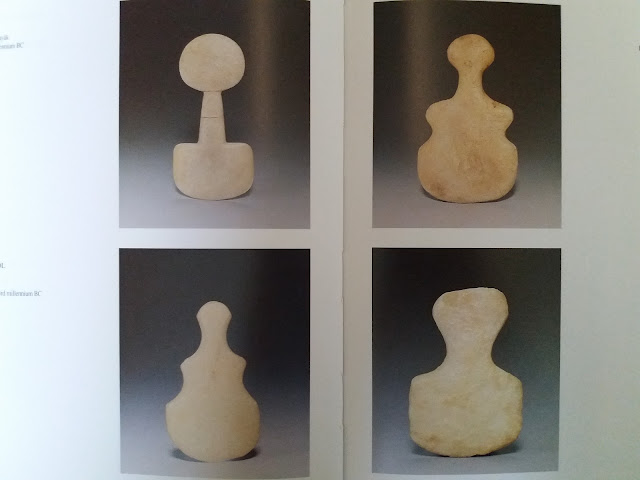 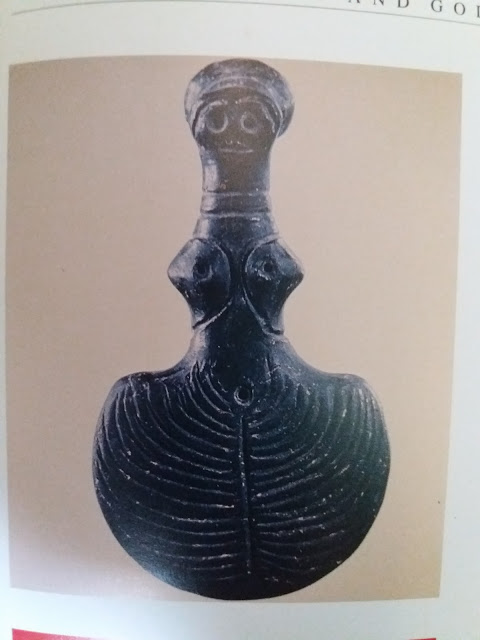 I have been looking at the images in the book for a couple of days now and the ones shown here are my absolute favourites. Thinking about what to say I let my eye wander in my studio and noticed the stack of books on the desk and I remembered, correctly, that I had ear-marked this particular poem, after having read it a while back in one of Dee's posts. It seems highly appropriate at this moment in my life.

In the very earliest time,

When both people and animals lived on earth,

a person could become an animal if (s)he wanted to

and an animal could become a human being.

Sometimes they were people

and there was no difference.

All spoke the same language.

That was the time when words were like magic.

The human mind had mysterious powers.

A word spoken by chance

It would suddenly come alive

and what people wanted to happen could happen –

all you had to do was say it.

Nobody could explain this:

That’s the way it was.

Shaking the pumpkin. Traditional Poetry of the Indian North Americas

I bought the volume in January 1993 in Amsterdam, where D. and I were living at the time, ha I just noticed both books were bought in the same year

I find myself looking for inspiration in books that have either been with me or my parents for a while now; after the initial relief that her suffering had come to an end and hence my anguish and worries about her seemed to have disappeared into thin air, I woke up with a heavy heart this morning and was rather tearful today: I missed her, the acute realisation of never ever being able to touch her or talk to her again hit me. So, I said to self, this is also part of the mourning process.

*inspirare Latin:  to breathe into, to animate

Email Post
Labels: earth mother family mother motherhood poem
Saskia
Hi, I'm an artist. ' Art might simply be the awareness of how we might create self. That we do. What happens, and then, what we do about it. The story. And the expression of that.' Jude Hill - Spirit Cloth [with kind permission]

Liz A said…
my parents lived 500 miles away, so most of our contacts were by phone ... after my mom died, I felt as if she was just out at the store or in the shower when I called my dad each week ... it was probably 18 months before my heart accepted the reality that my mind had long comprehended

oh I know that feeling Liz, it started even before she had died as we couldn't talk to each other on the phone during her last months on earth! plus despite the pain, I do feel being missed is better than not being missed, right

deemallon said…
Saskia ! I’m so sorry for your loss. It is no easier for being a long time coming. I, too, appreciate how you are honoring your mother and the mothers before her by pausing to examine and appreciate these ancient figures. Peace to you in the coming days.
27 November 2020 at 11:10