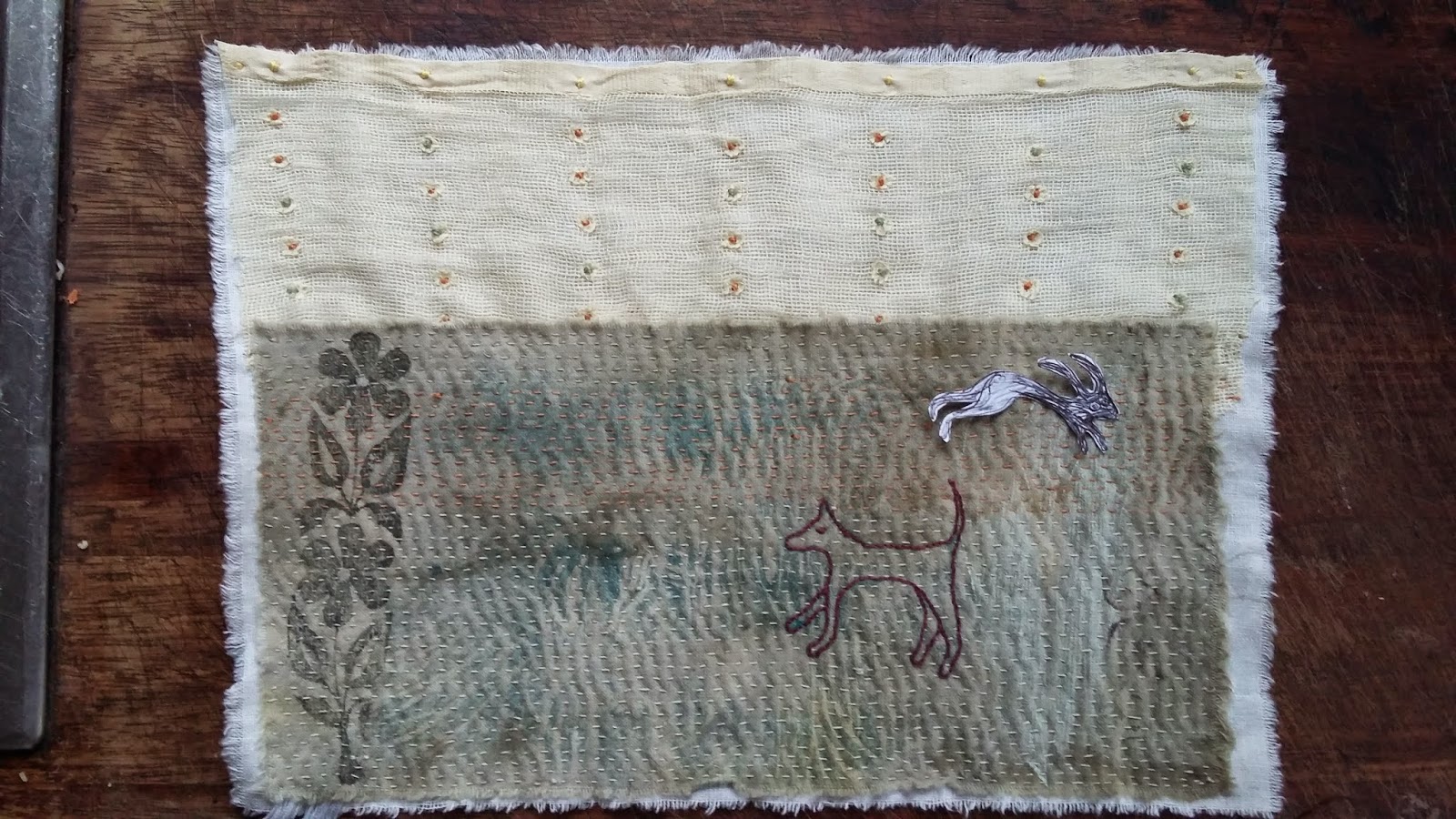 from his latest album The Fade in Time, which arrived Thursday in the mail as the crowd fund was successful:

See how she laughs, see how she cries  When something stopped her running
Though lay you still, my poor pussy cat  For your uncle now he is coming

'Sam Lee on this song:
A song of love and devotion for the wild hare and a passionate reconciliation in song of the paradox of having to kill the things we love for survival. ‘Airdog’ tells of that almost carnal embrace of dog and hare as they tumble entwined in slow motion across that liminal landscape of love and death. It’s a most tranquil ceremony on the laying to sleep of the ‘pussycat’ as it transits from being lithe potent creature to mere quarry and marketable meat. From the singing of Gloucestershire man Wiggy Smith and intersected by bits of jasper Smith’s ‘Brighton Camp’,  for me this song is true Gypsy poetry'

I would have liked to have been able to share the video of this particular song, alas I could not find it, recommend you connect to his site here samleesong.co.uk 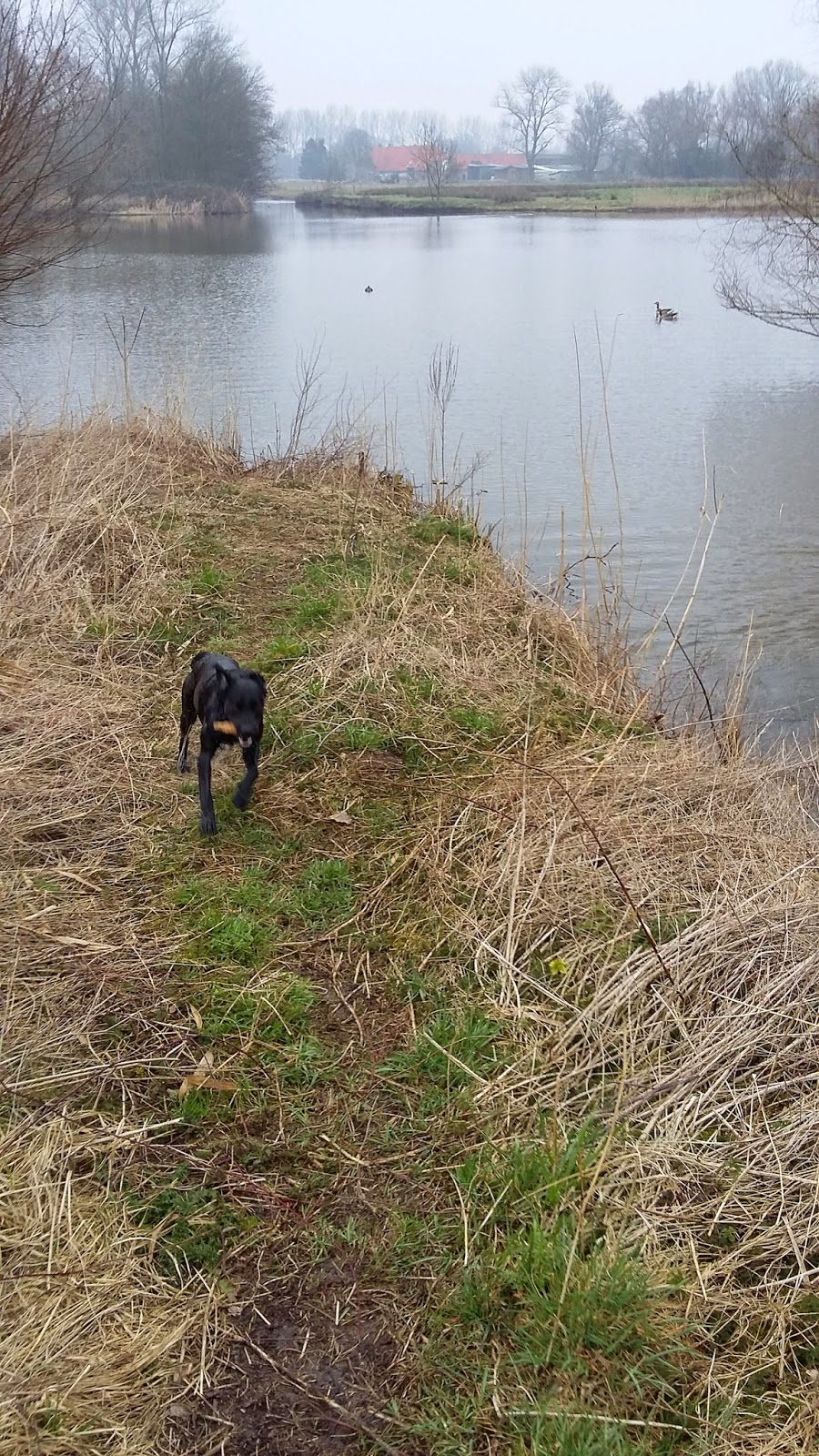 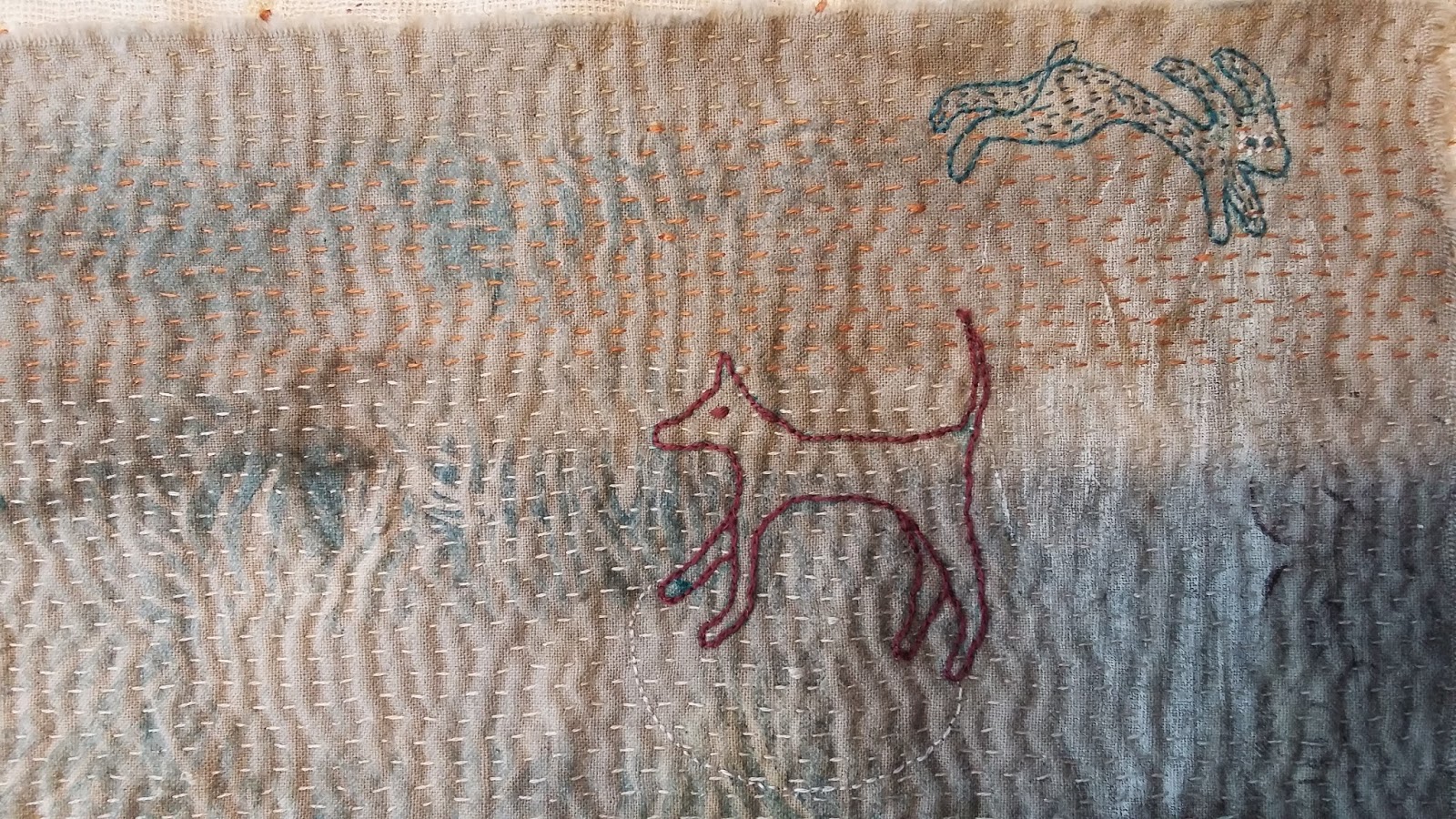 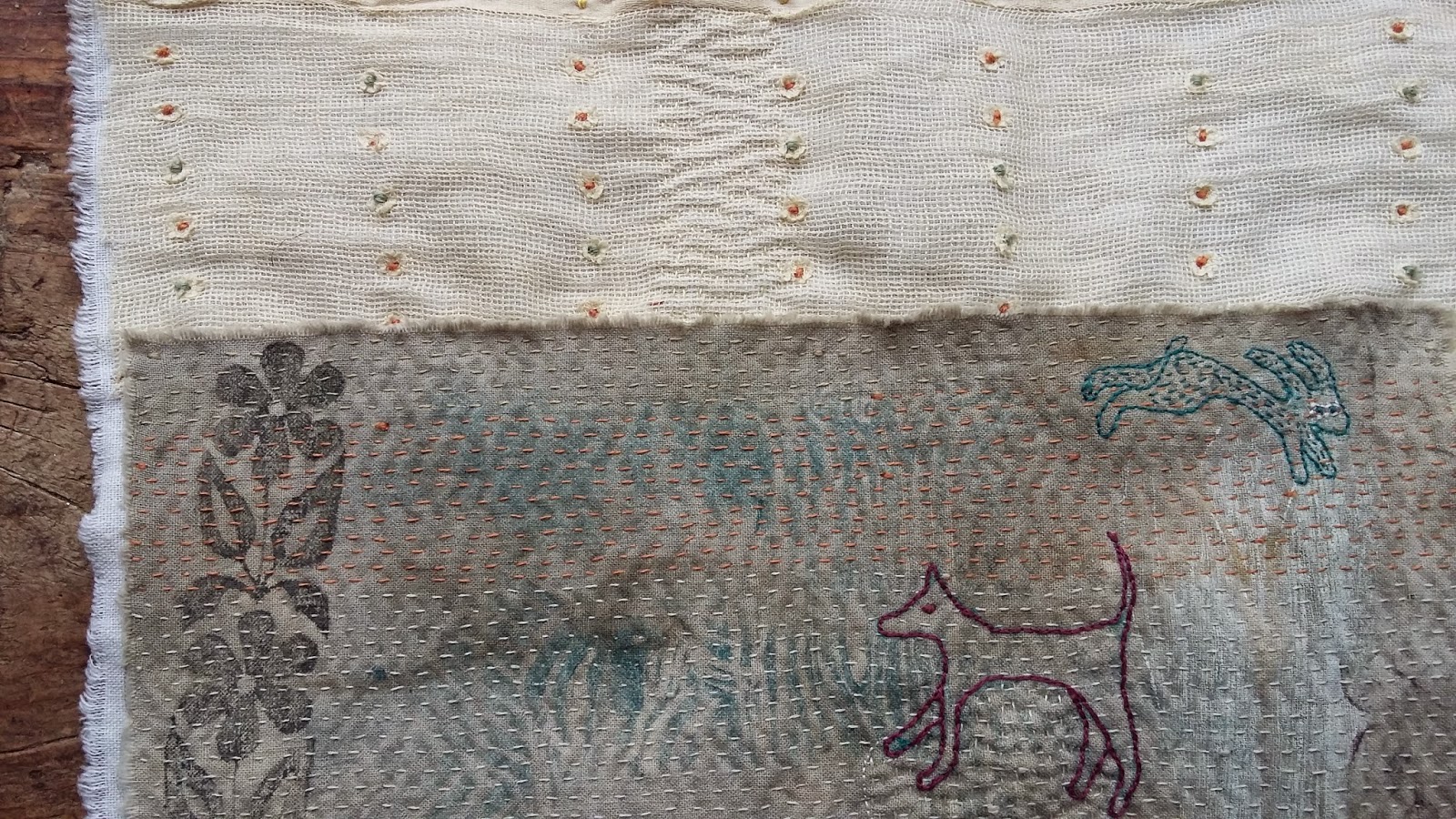 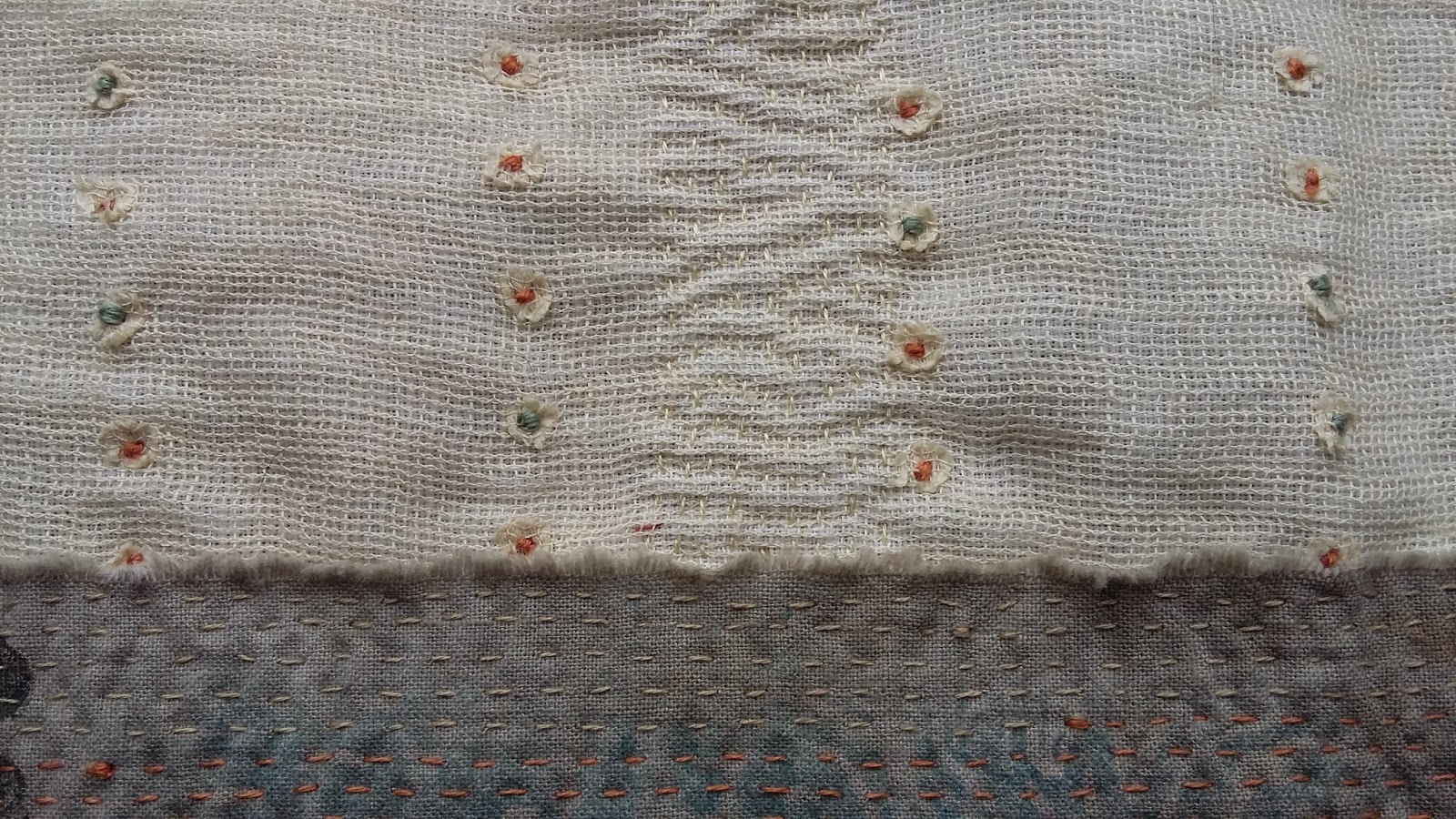 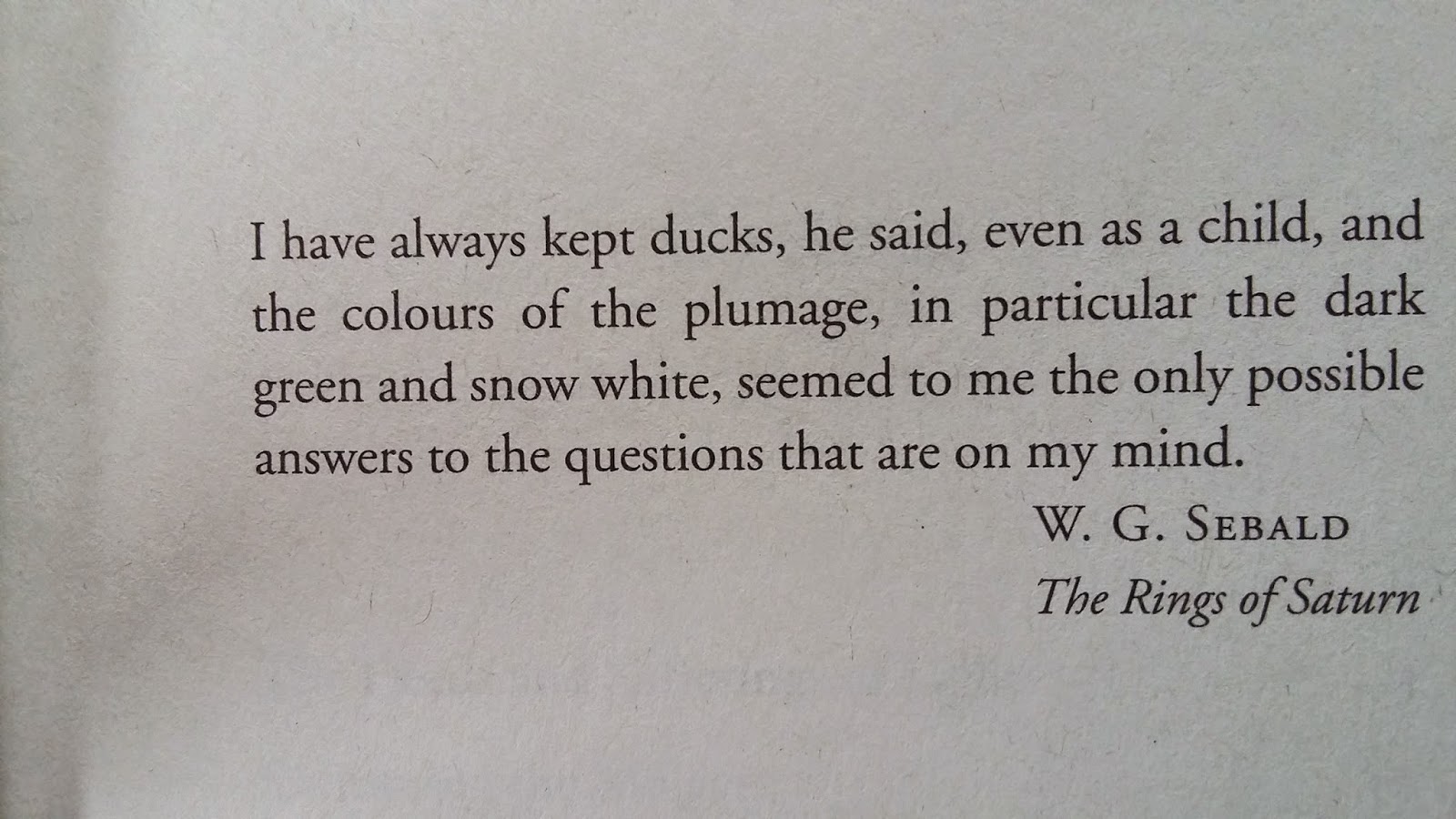 How my mind moves

I pick up E.Meloy's ‘anthropology of turquoise’ having decided to take this along to the shop today, who knows I might have an opportunity to read; just before inserting the book in my bag I cast a glance on the first page and in that instance am almost swept off my feet by the incredibly sensual depiction of this to me unknown land -  good choice then; am consequently struck by the quote right at the very beginning, most especially by the author’s name W.G.Sebald, a name I don’t know, however I am intrigued and mentally make a note to check on him in the bookshop. Once there I forget all about Sebald until I open ‘de Wandeling’ by R.Walser, another book I want to read and lo and behold in this book again the name Sebald. Now I immediately google him and uncover some interesting facts, he was German and has spent a good part of his life in the U.K. teaching European literature, he loved walking and has written several books….. I pick one and order this. It appeals to me because it’s about his hiking in East Anglia ‘Rings of Saturn’, I then turn to Turquoise only to discover the quote is from this very book. Full circle, wandered a good deal in words, the mind full of swirls as it keeps on making connections. 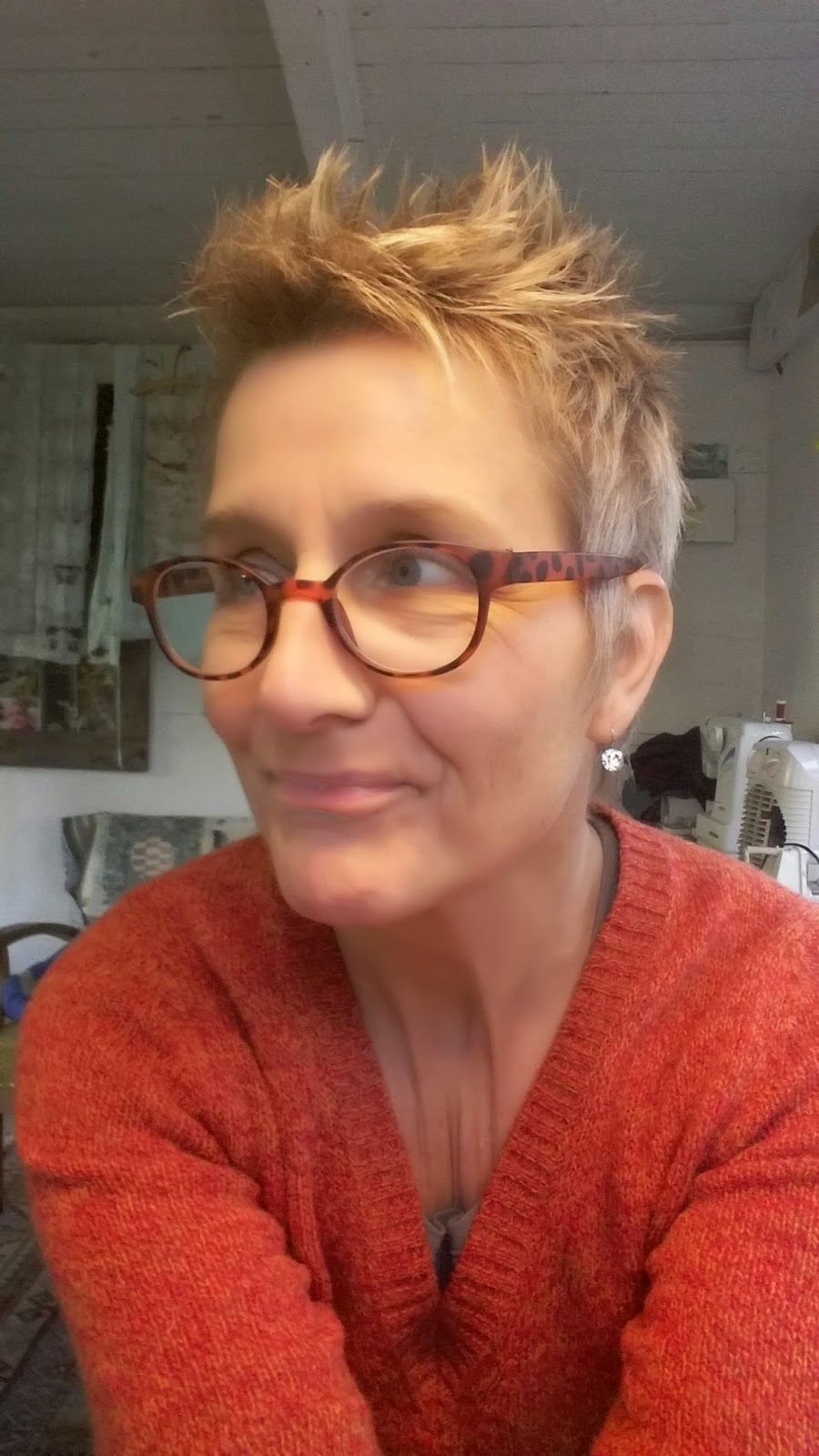 Dropped in at the book shop to collect a couple of second-hand books; we have recently experienced the generosity from one who apparently read English on an academic level, so amongst these gems not only ‘regular’ novels abound, there appear to be many text books. I gathered these three: Sterne’s ‘A Sentimental Journey’ and a collection of Anglo-Saxon Poetry, both in an Everyman’s Library edition and ‘The owl and the Nightingale’, ed. By Eric Gerald Stanley (Manchester University Press, 1972) 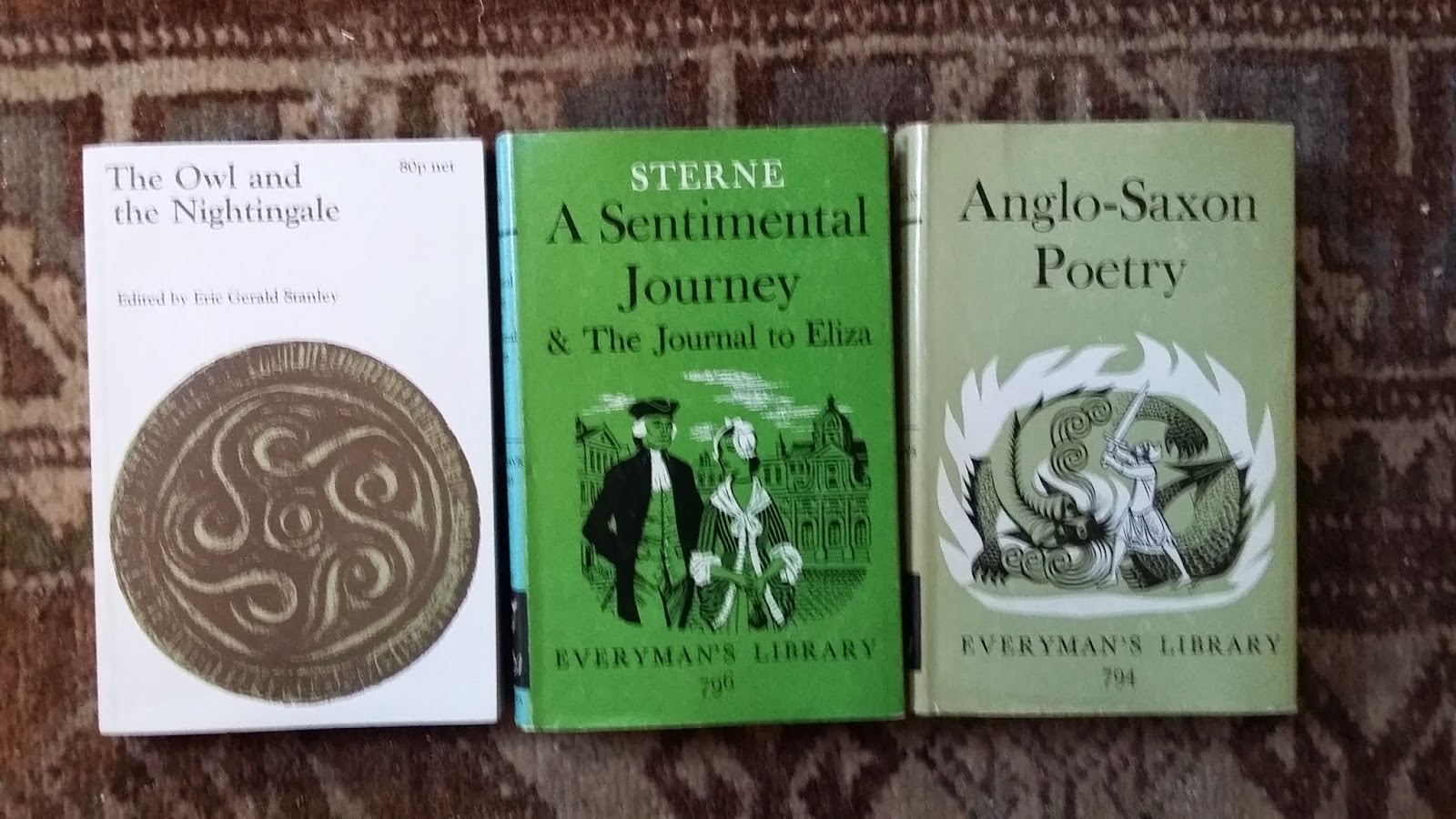 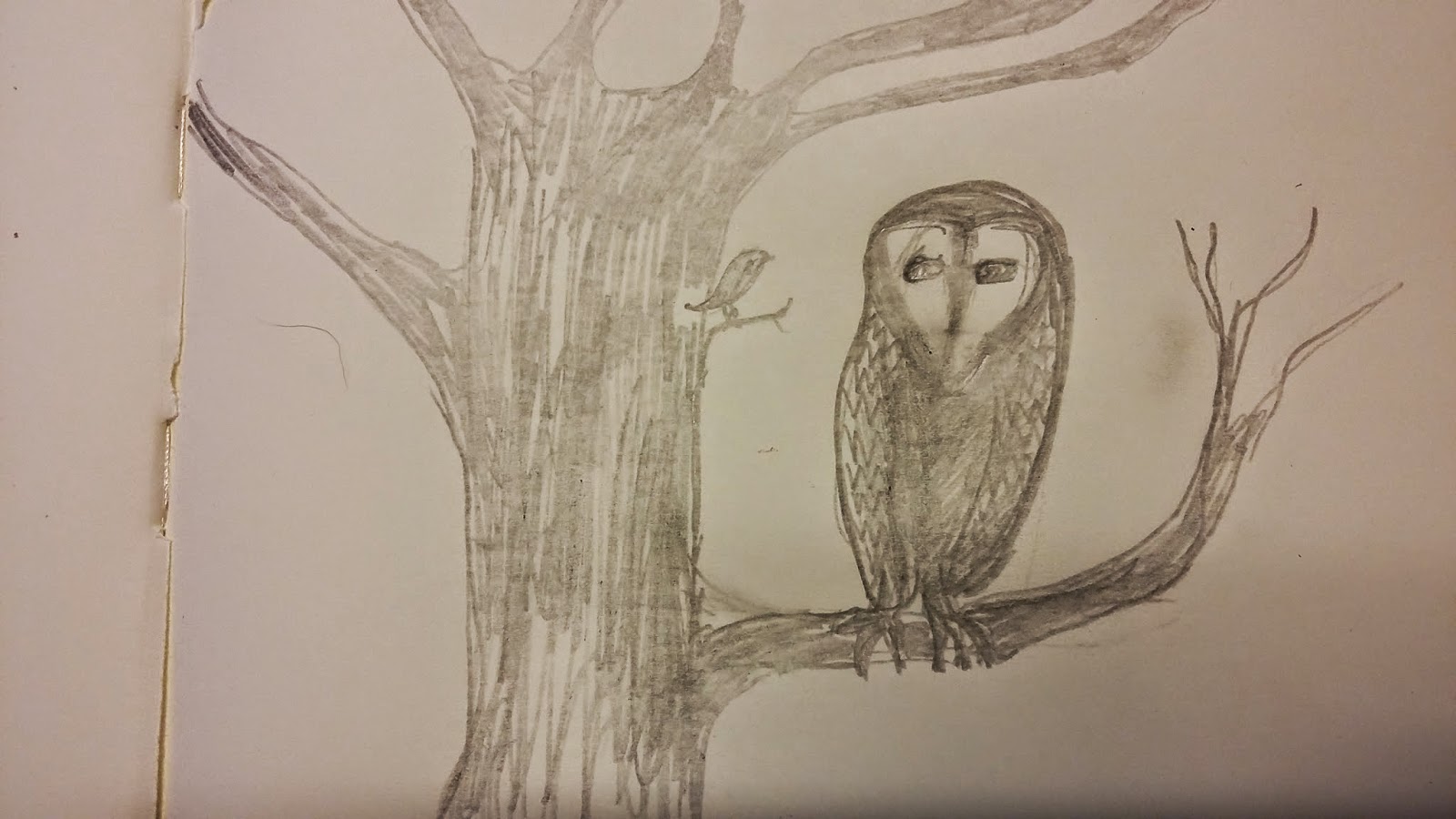 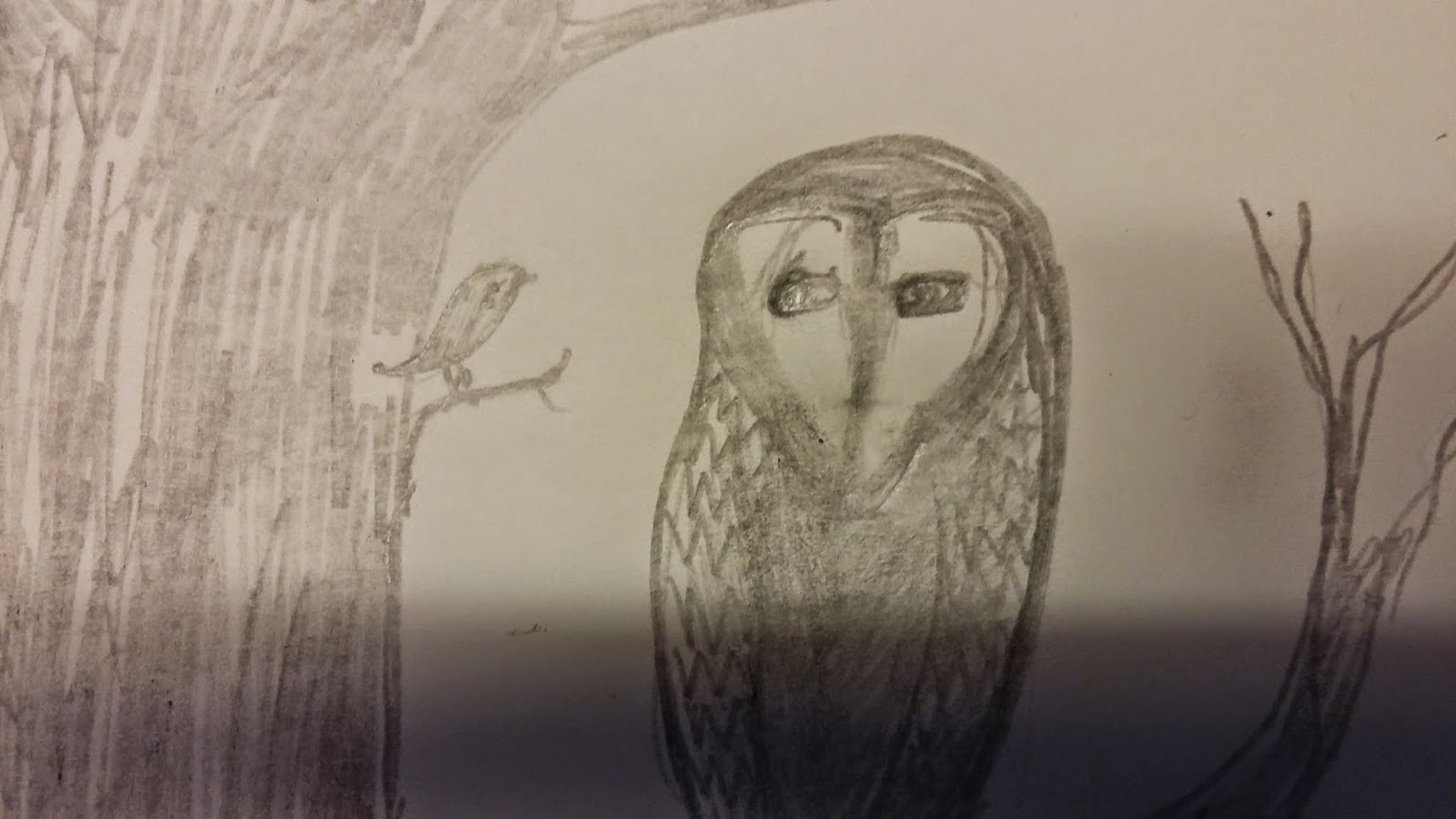 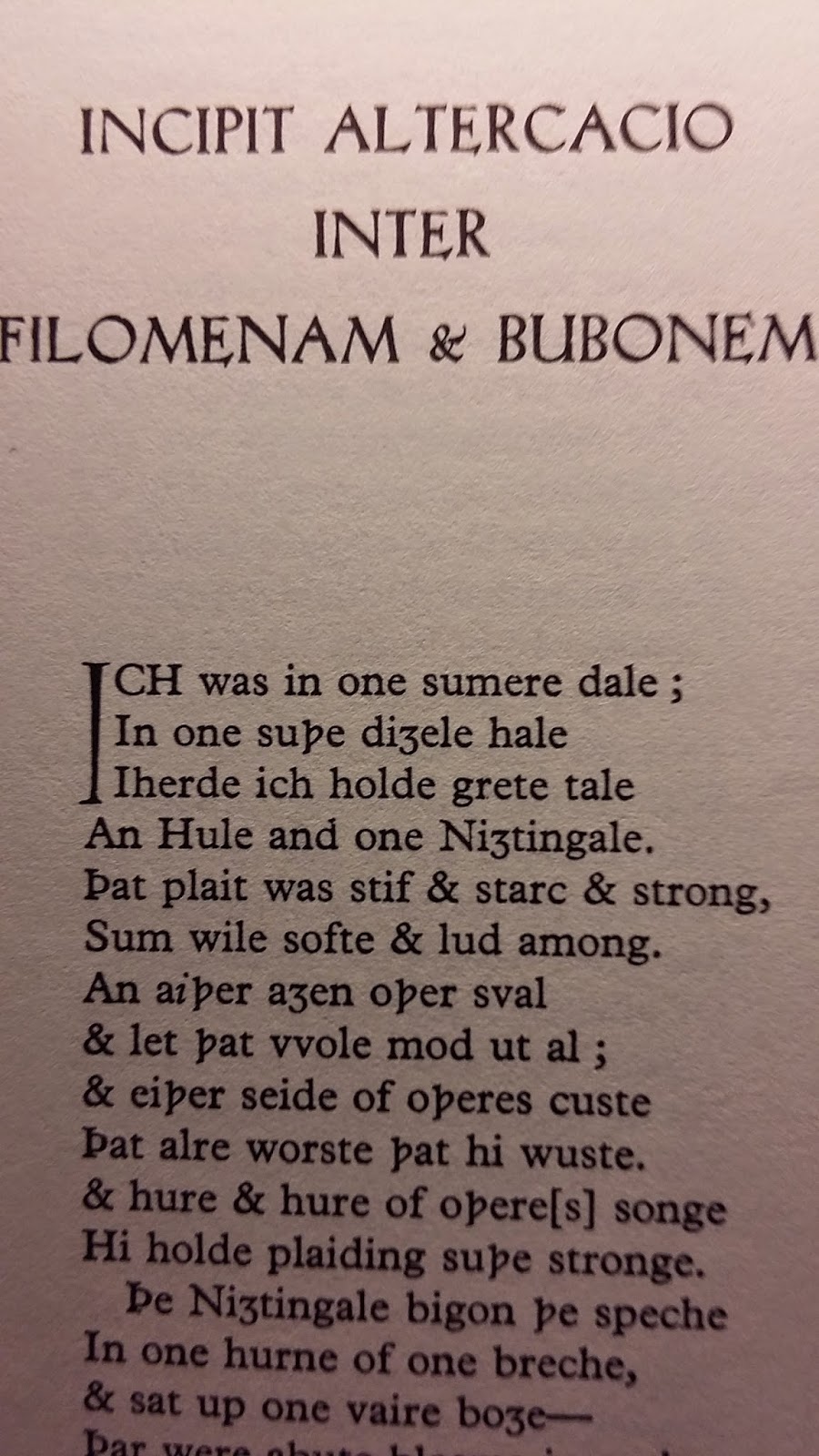 The last turned out to be a pleasant surprise as it is an over seven hundred year old poem, printed here in Middle English - I think -, which to my untrained eye bears many resemblances to Dutch, Latin and Scandinavian languages – which should probably not come as a surprise
It will not be an easy read, but it has immediately got my imaginative (is this a proper word?) juices flowing, a drawing ensued and now I almost do not want to try and find a version in more readable modern English. However I am also very curious to read the tale…..

Here a quote from the introduction:

‘Those who have considered The Owl and the Nightingale as a work of literature have written of it with so full a measure of praise that one comes with relief upon Thomas Wright’s introduction to his edition of 1843, where he simply calls it ‘a curious poem’. That it is, and it is more than that. More than any other English poem written before the fourteenth century it makes an immediate appeal to the modern reader. The Nightingale delights; and the crab-faced Owl disapproves of our delight, of our frivolity, and of the Nightingale’s lascivious promptings. We are allowed to listen to the debate of the two birds, not asked to judge between them. For we are not to be trusted; we might well decide in favour of the plausible Nightingale, though on more sober reflection we should perhaps admit that it is to the Owl that the victory ought to have gone. The disputants have chosen a better judge than we are, one Nicholas of Guildford, wise, just, and learned, yet not inhuman. Alas, we shall never know for whom he finds. The poet too appears impartial. Let us likewise reserve judgment, at least till we have heard the case.’

Are you excited too? Curious to know what the poem is all about?
I most definitely am and have googled several sites and will ‘cheat’ by reading a translation in modern English!

Email Post
Labels: dog e.meloy music nightingale owl sam lee small journey w.g.sebald walk
Saskia
Hi, I'm an artist. ' Art might simply be the awareness of how we might create self. That we do. What happens, and then, what we do about it. The story. And the expression of that.' Jude Hill - Spirit Cloth [with kind permission]

Liz A said…
I love this new cloth and am very much interested in knowing more about the top half. What kind of cloth is it? And are those thread beads? Pray tell ...

Dana said…
Saskia, I love this tale of the threads of life winding back upon themselves...in the song and in your cloth where life and death intertwine, and in your reading where the words that touch you reach out of one book into another, leading you more deeply into inner experience.

Mo Crow said…
I love the subtle spareness of your drawing & stitching Saskia!
The Anthropology of Turquoise is one of my favourite books, along with A Field Guide to Getting Lost and The Farway Nearly by Rebecca Solnit and Wild by Jay Griffirths, such powerful passionate writers connected to the deep spirit of Gaia...
as are you
21 March 2015 at 20:58

Saskia said…
hi Liz, I am so glad you commented as I realised whilst looking for a clip for today's post that the lyrics I copied for you the other day were of a different song (on yonder hill) not the one in the video!

OVER YONDERS HILL
Over yonders hill there is an old house Where my true love goes and sits himself down Takes another fresh girl on his knee Now don’t you think that’s a grief to me
A grief a grief I’ll tell you for why Because he has more golden eyes Gold may glitter and silver will shine And all her beauty will fade in time
And I wish, I wish my baby was born And sits smiling on his daddy’s knee And me myself wrapped up in cold clay And the green grass growing all over me
There is a flower I have heard people say It grows by night and it fades by day And if I could that flower find It would cure my heart and would ease my mind
So across the fields that poor girl she ran She was gathering flowers just as they sprang Some she picked and some she pulled Until she gathered her apron full
Then she went home and she makes her bed She put a snow white pillow all under her head She lay down and she closed her eyes She closed her eyes no more for to rise


in answer to your question: the very fine curtain fabric is cotton - which I forgot to mention was a gift from Julie Of Threading the Dog -, with a regular pattern of dots, where upon I have sewn the thread beads; this piece is in fact an older one I made for last year's exhibition (title: Black Flower, you can see the original on the exhibition page, click up above) and I'm now embellishing it, looking at it now I decided it needed a short story

hi Dana, I hope the answer to Liz's comment has brought enlightenment to your query as well!

such a grand compliment from the suberb draughtsman that you are Mo, so I thank you

Nancy said…
This cloth is indeed alive! The critters spinning and leaping in a field of stitch. Love it. So many book treasures floating around, apart and then connecting. Love when that happens. Enjoy your youngest for a spell :)
22 March 2015 at 07:18

grace Forrest~Maestas said…
the best, when the stitching and
the book finding intertwine...
it's a very Fine Cloth, this one
23 March 2015 at 16:02 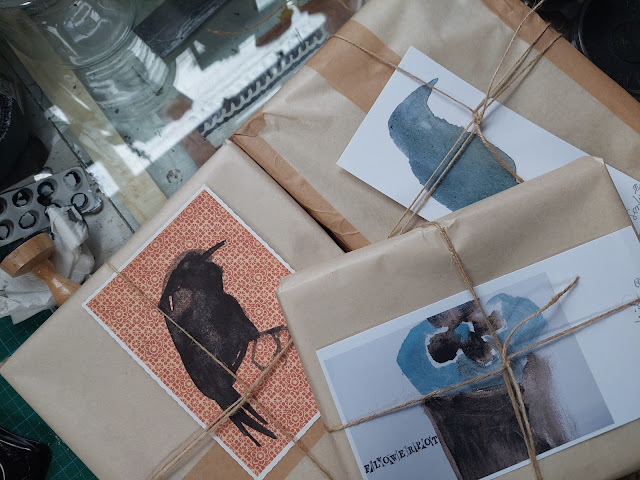