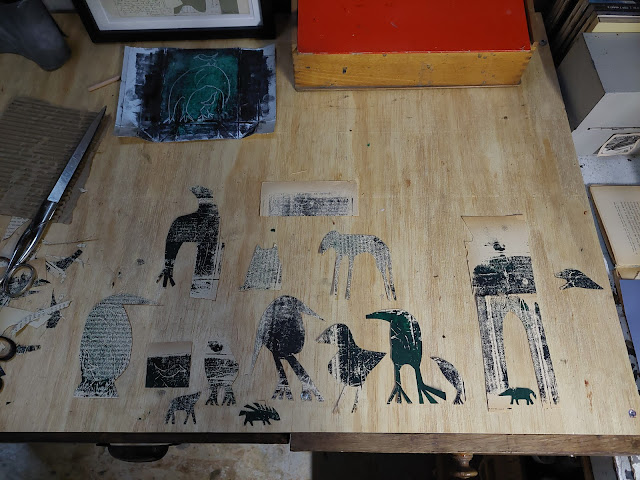 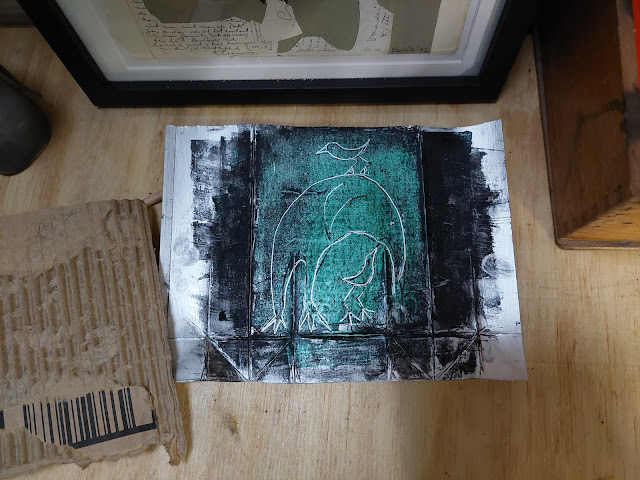 So much going on here, not just the build-and-all-things-related, nor the beings that have appeared on my freeed-up workbench in the studio (a byproduct of my personal building frenzy)
I have become an activist, somewhat small-time and late in the day, but hey very involved and fired up!
what about you may wonder?
Let me explain: in the nearby woods, or rather in the recreational part of those woods (only in the Netherlands do we have these kinds of distinctions I guess) the campsite changed hands 10 years ago.
The new consortium of owners blew in from the Randstad, imagining they were treading upon uninhabited territory - as if such a things exists in our teeny tiny country - followed in their trail by their many handsomely paying guests, turning the once quiet, rather boring, campsite into a noisy event-tooting wannabe place for the incrowd.
For 7 months of the year we might be treated to music on a balmy Summer evening as it stampedes into our gardens and bedrooms, or shaken up by fireworks at midnight.....light-laser shows have shooed away the little owls from their nesting box, peace no more for the critters in the woods, litter noise light, ugh!
Recently they have acquired a licence to enlarge the site ánd organise 12 events during the season, officially, 'cos up till now they have been staging way more than the 2 they have permits for. I do not know how this kind of stuff is regulated in other countries, but here you can only dispute a permit application once it has been granted!
So there we are, on opposing sides of the poker table.
I'm not gonna say more because I don't know who's reading this blog and I do not want to show my cards just yet 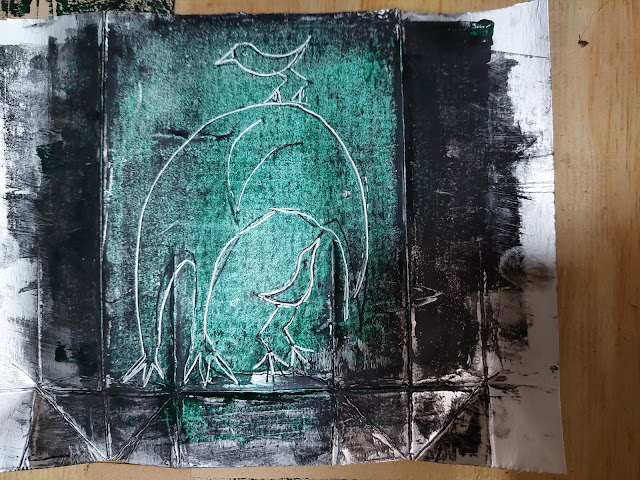 Email Post
Labels: being bird black & white prints
Saskia
Hi, I'm an artist. ' Art might simply be the awareness of how we might create self. That we do. What happens, and then, what we do about it. The story. And the expression of that.' Jude Hill - Spirit Cloth [with kind permission]

Nancy said…
"you can only dispute a permit application once it has been granted!"...indeed! Talk about putting the horse before the cart! Geez.
Your critters are bursting out all over! Love that last image. The color is great, the action lively...just raw. xo
19 November 2022 at 20:51

Nancy said…
Saskia~ We just watched this and I thought of you. I found it so interesting that he added the color from the back, allowing it to bleed through. Cool.
https://www.pbs.org/video/appraisal-shik-munakata-print-d7km44/
20 November 2022 at 04:22

deemallon said…
So sorry about the potential development. Hope you and others can be heard.
20 November 2022 at 05:10

Liz A said…
I've always believed my rights end where yours begin ... and vice versa ... if only ... but assaults on the senses are everywhere (the noise of fireworks and hotrodding cars, scents of all kinds from cloying perfumes to foul dumpsters, exterior lights at night misleading migrating birds ... the list goes on and on) ... and now the Who's rock opera Tommy is playing in my head (sigh)

See Me
Feel Me
Touch Me
Heal Me

Saskia said…
backwards is forwards these days Nancy:-(
but we will stand our corner, for what it's worth

(I know how much leaf-blowers piss you off, the guy who invented that contraption deserves a long stay in purgatory)
21 November 2022 at 17:34

CatherinE said…
Good luck with your cause, it is a worthy one. My partner just recently joined local government here ("selectboard" of 5) and it is eye-opening to learn about the kind of disputes that people get involved in.
2 December 2022 at 16:16

Saskia said…
thX Catherine! I wish your husband good luck as we humans are a cantankerous bunch;-)

[although i like to imagine deep down we all want the same thing: to love and be loved.....crappy christmas well-wishing is creeping into my head!]
4 December 2022 at 14:36