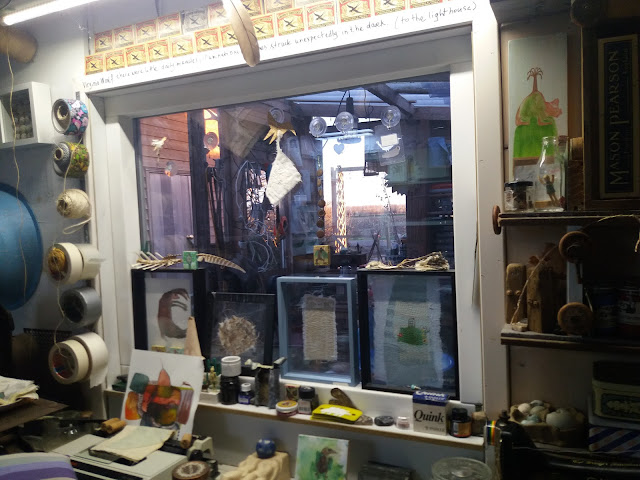 in the studio looking out

I'm not there now, as I type this post I'm in our parents' house tidying-up accumulated debris collected over a lifetime. This is an exaggeration as most of the stuff could be considered worthwhile, there's just so much of it and I have come to realise in my line of business that we humans have a tendency to hold on to too much.

Our dad's first weekend of the new year was not a success. Most probably he suffered a stroke in the middle of the night. He cannot tell us what happened. The home care nurse arrived early in the morning and found him on the upstairs landing wearing two pairs of pyjamas, two pairs of socks, wrapped in his dressing gown (at least he wasn't cold). He had no recollection of why he was lying there and was extremely confused. Long story short I dropped everything to travel south to stay with him, as he needed 24 hour care. A night nurse was arranged, my sister joined me and we tried to look after him as best we could but soon realised we couldn't. He was placed on an emergency-list by his GP and after one-and-a-half weeks was admitted to a nursing home in Valkenburg, a short train ride away from his home. Due to Covid visits are extremely limited, we started with two visitors for two hours a day and are now reduced to one visitor a day, for two hours. He seems to be okay, he's asleep most of the time, is not in pain. He can hear you (when he's awake) but conversation is difficult so I ask questions to which he only has to say 'yes' or 'no'

I just sit most of the time I'm there, with not a lot to say I realise.

For the foreseeable future I'll be here a few days each week, taking turns with my siblings.

In the course of the clearing out of cupboards, dressers, desk drawers etc. I am stumbling upon all sorts of personal tidbits. I hasten to add that I'm fine with this and started writing this in Dutch first:

I love my parents most when I happen upon unintentional signs of their vulnerability, a note from mama on a folded scrap of paper hidden deep in a coat pocket, from my papa a reminder written between brackets on an enclosed envelope stuffed with used stamps.....it seems as if I can verily see them, in these inadequacies lies the opening to their true selves

That which we as human beings long to make a connection with and what appears to be so difficult between parents and their offspring, the unspoken things that matter 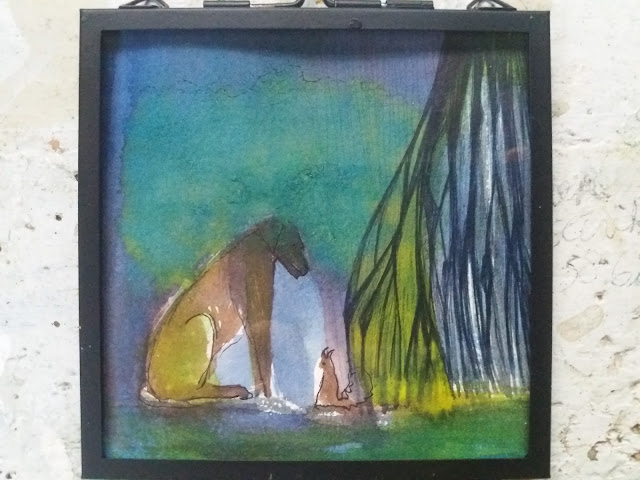 rummaging* in my studio I found an old painting from 2010 and cut out my favourite part to fit this small frame (appr. 10x10cm), the rest went into the wood burner, yes I'm brutal like that

* the rummaging has a purpose, more on that in the next post.....

Email Post
Labels: dog family studio
Saskia
Hi, I'm an artist. ' Art might simply be the awareness of how we might create self. That we do. What happens, and then, what we do about it. The story. And the expression of that.' Jude Hill - Spirit Cloth [with kind permission]

grace Forrest~Maestas said…
the painting is Intense....there is an exchange occuring...the long
grasses witness....
your Mother...just so recently gone and this, now, you are
being asked a lot. It feels like there is a lot left unsaid
in your post, that you have simply put an opening, like a doorway...

i feel that. and thought....what would i like my daughter to
say to me? ask me? would i hope she would ask me something? would
i hope she would Tell me something? she is late 40's. I'm 75.
Soon enough we will be like you and your Father. These images
you give us...so Beauty Full, Saskia as Cynthia says...Gentle Day
26 January 2021 at 21:51

Saskia said…
75 Grace...ha
age does not seem to affect you
yes a lot is left unsaid, i realised it was so much (too much?) i couldn't be botheted and it doesn't matter, like art, this blogging is "condensed life"
well that's how it is for me
there is space in my head and i'm looking forward to the future and feel things are okay
26 January 2021 at 22:07

Marti said…
As with Mo, I too send you a hug Saskia: it is not easy to do this work for I well know how it is, the discoveries of our parents lives, the sorting of a lifetime. The words you write, the words you hold within yourself, it is all how we accept what is, what is coming, what has been.

My mother died two years after my father so it came mainly to me, to sort through a lifetime of household and life items and get the family home ready to sell. My sister helped as best she could but she lived far away and it was not so easy for her to get to our hometown.

At first, I sorted piles and piles of household goods, clothing, linens, furniture, photos, many photo albums, religious items, etc. Donated some items, gifted others, sold others, kept a few things and then became ruthless with getting rid of things that I saw no use for...all of these years later, I wish I had been a little more "gentle" in how I handled what mattered to them but you can only do what you can do in the moment while dealing with what is an emotional, exhausting yet in some ways, special ritual...

So I would say to you, dear Saskia, do what you feel is right, and when and if it seems at times to be too much, let it go and try to take care of yourself. A wise woman, my Mom's dearest friend, reminded me of this when I was in your shoes so I pass it along...
26 January 2021 at 23:00

Hazel said…
Dear Saskia, I'm so sorry for all that you and yours are going through. Yes, evidences of their vulnerabilities...Two years ago, going through my dad's stuff, I kept the strangest things- an empty coffee can, a half written letter, grocery list in his writing, etc...
I love the light between the two of them in your painting.
Wishing you strength and comfort.
27 January 2021 at 00:28

Nancy said…
Oh Saskia, my heart is with you at this time. Everyone sharing their hearts and thoughts. I wish I'd had some of that kind of support when first my dad, then my mom passed.
The painting is amazing...saying so much. When you speak of "the unspoken things that matter" and in the comment to Grace, "couldn't be botheted and it doesn't matter"...this is just where I've been for so long now, considering what matter. I literally just posted about that - so your words really jumped out at me, especially regarding parents and offspring. Sigh.
Be well my friend and yes, take good care of you.
Sending love and hugs
xo
27 January 2021 at 01:36

Liz A said…
there is no easy way, and so there are no easy words

but you are not alone in this, as the comments attest ... and your experience helping others get through their things will surely serve you well ... with the limited time you can spend with your dad, I'm glad you have something you can do in between visits ... and yes, I remember sitting by the bedside of my widowed dad as he steadfastly refused to eat ... wordless

Saskia said…
addendum Grace: today I asked him what he was thinking....too difficult for him to formulate an answer; are you thinking of mama? an emphatic YES....and then, out of the blue, he asked me: are you still drawing? wow...plus he opened one eye as I left

Marti, wise words.....going back to my own life (as if being with my dad isn't but you get what i mean) is the much-needed break i permit myself, plus yoga every morning;-)

oh Hazel, the weirdest, small things bring the acute sense of loss to the fore and seem most important to hold on to

'snap' Nancy, what matters can hardly be expressed, although we keep on trying